Yesterday I received a copy of Richard Mitchell Edwards' "Down the Tennessee". This is a collection of Mexican War reminiscences from his service in the Tennessee 5th Infantry, published in the Knoxville Tribune between 24 January and 17 March 1895. Stewart Lillard edited these articles into book form in 1997 with maps and detailed supplemental notes.

It is unfortunate there is not yet a digital version of this book available for easy access, as this is an invaluable book for anyone interested in the journey taken by the 5th Infantry from muster outside Knoxville to Mexico and back. Lillard has done an excellent service in collecting these articles to preserve the record of the 5th Infantry.

Edwards was quite remarkable in his own right. He was born in 1822 in East Tennessee. He served in the Tennessee State Legislature before the Civil War and argued for maintaining the Union. He later became a Colonel in the Union Army. After the war he became a statesman and even ran for Governor of Tennessee. He wrote on the history of Bradley County, Tennessee and then in 1894, began writing about his experiences in the Mexican War.

There is quite a lot of useful information in this book. But importantly for me, it provides a first-hand account of what happened to Robert Thomas Jones Jr, the son of Robert Thomas Jones Sr, who had enlisted with him in Company G. This also details their journey to war and back. I will have more posts in the future from the descriptions in the book.
--
Knoxville to Muscle Shoals

According to Edwards, the regiment started down the Tennessee River on 7 December 1847 on eight flat boats, one for each company. The boats were tied together in rows of two, and pulled along by the steamer Sam Martin.

Below is a current map showing the rough path followed by the regiment on flat boats on the Tennessee River, through Alabama, back up through Tennessee, to the Ohio River and then to the Mississippi at Memphis before continuing to New Orleans. 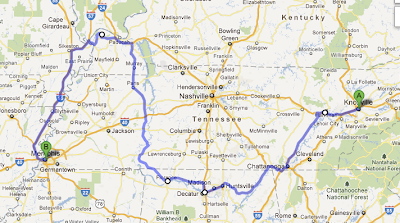 "The boats were prepared with two tiers of bunks on each side for sleeping with straw and blankets. Capt. Vaughn's boat and Capt. Reese's were lashed together, Vaughn's on the right and Reese's on the left securely fastened with ropes around the corner studding in front and rear. Two notches were cut on the outer side of each boat for bough oars to work so that each company did its share of pulling the oars. The Sam Martin steamer would fasten on to four boats and kick them along awhile and then go back after the other four and take them a few miles. It was slow business, but the reader must remember there were no railroads then and the river route beat walking a long way."

The regiment encountered heavy rain and flooding as they made their way down to Chattanooga. The trip between Chattanooga and Decatur, Alabama passed largely without incident. The regiment stopped at Decatur before Muscle Shoals, where the Tennessee River turns into rapids and the river becomes particularly difficult to navigate. In Decatur, Edwards notes that General French employed professional pilots to get the regiment through the Shoals. "Two men by the name of Ford were employed on Vaughn and Reese's boats as pilots, and the river was up and rising and we did not apprehend any danger or difficulty in making the trip."

Accident at the Muscle Shoals, 16 December 1847

"All things being ready we cut our boats loose about the 14th or 15th of December, 1847, and just above the head of the shoals we attempted to land, as night was falling and we wanted daylight for the trip. But the river was "out of banks," as the river men say, and so we had to tie to trees and the bank...it was a miserably cold night. There was snow on the ground and mush ice in the river, and the blankets were thin."

"Having passed a most uncomfortable night, we cut loose about sunrise next morning and started over the shoals. The wind was blowing hard from the north and forced us down to the south side. We were the leading boats of the fleet, but it was noticed that the other boats kept nearer the north bank. We were continually being driven by the wind toward the south bank, and when we came to the first rapids our pilots, instead of pointing to the north, pointed our boats southwest. Soon we came to the 'big jump' which having passed safely - a remarkable performance as the men thought - we were caught by a sturdy limb of an elm tree which raked Vaughn's boat from stern to stern, tearing off much of the planks along the side."

"Our boats continued to drift to the south and we soon found that to avoid lodging on the head of a 'tow-head' or small island, we would have to attempt to go through a narrow sluice about fifty or sixty feet wide between the island and the mainland."

Captain Reese's boat struck a tree sticking out from the side of the river, causing Vaughn's and Reese's boats to drift as they were heading into the narrow sluice. Here is Edwards' account:
"Several of Reese's men jumped into our boat [Edwards was on Vaughn's], when I seized an axe and cut loose from Reese's boat, while Capt. Vaughn cut loose behind. Immediately after I cut loose in front, the front end swung around and touched against the island, when Reese's men jumped on the land, some falling in the river; but all got safely to land on the island but one or two."

"Our boats went staggering down the narrow sluice, crashing under limbs of overhanging trees, by which we lost our steering oar and part of our roof...a great amount of drift was running as the river was rising very rapidly and many wild stories were told of seeing men floating down the river on drift."

"I got into a canoe with another man and went down through the back-water searching for the men said to have floated down on logs and drift. We soon heard some one calling and hastened as rapidly through the tangled vines and brush as we could, the sound of the calling continuing but growing weaker until it finally ceased."

"We continued on down near the shore and finally found a man sitting on a drift by the name of Jones, belonging to Reese's company. He was speechless and frozen stiff...we hastily tore him loose from the limb around which he had one arm and put him into the canoe and, wrapping my coat around him, took him back to the boat where he was revived. It was found later that his brother in the same company was drowned or killed in the wreck. It was also reported that the Jones I saved died afterwards at the National Bridge [Mexico]."

In the morning, 17 December 1847, the shipwrecked men from Reese's and Vaughn's companies were rescued from the island in the river. Four other boats passed through the shoals with no problem, although Edwards later learned that Captain Shaver and Captain Powell's boats also wrecked into the island. The shipwrecked men then marched across land to Florence, Alabama where they met up with the six remaining boats. A steamer called the Uncle Ben was chartered in Florence to take the men to New Orleans. The men of Vaughn and Reese's company were given deck passage while the other companies were towed in their boats alongside the steamer. The regiment left Florence on 20 or 21 December 1847 for New Orleans.

Edwards saved a Thomas Jones, age 29. The muster roll for him states that he died of accidental drowning at Muscle Shoals. The footnotes of the book describe other letters published in the Knoxville newspapers describing the accident. By Wednesday, 29 December 1847, people in Knoxville and surrounding areas receiving the Knoxville news would have heard of the accident.

Rev. W. H. Rogers wrote from Florence on December, "When Capt. Reese's boat struck, the roof and the sides fell in, killing Thomas Jones Sr.; and Thomas Jones Jr., was swept off and has not been heard of since - both of Capt. Reese's company."

Edwards' book ends the mystery of what happened to Robert Thomas Jones Jr after he mustered into Company G in 1847.
--
Previous related posts on the Tennessee 5th Infantry in the Mexican War:

Posted by Patrick Jones at 1:46 PM