It appears my trial of Fold3.com has paid off in finding my 4th great-grandfather Robert Thomas Jones Sr., his son Robert Thomas Jones Jr., and some others connected to the Jones family in Company G, Tennessee 5th Infantry. This Company was led by Captain John Reese, and mustered out of Knoxville in early December 1847.

The regiment traveled down the Mississippi River and arrived in Veracruz, Mexico, sometime before February 1848. According to the Company Muster Roll on Fold3, they did not muster out on 31 December 1847 "because the regiment was put on different vessels in the Mississippi River and was in the eve of going to sea consequently it was impracticable to muster them on that date." 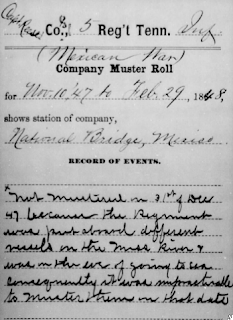 They did eventually arrive at Puente Nacional (National Bridge), near Jalapa, Mexico, and were stationed there in March and April 1848. I'll have more on Puente Nacional and Jalapa in a future post. There is an interesting description of this area and the Mexican War in a book titled Service Afloat and Ashore by Lt. Raphael Semmes, US Navy (dated 1851, found on Google Books). 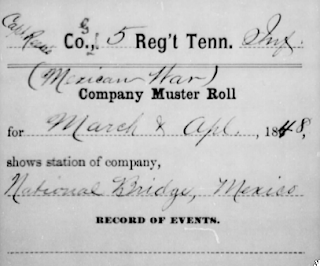 Company G returned to Memphis, Tennessee by 20 July 1848. I would be interested to know more about the journey from Tennessee, down the Mississippi, along the Gulf Coast to Mexico and back to Tennessee during this time period. I have seen reference to a book titled "Down The Tennessee" by Richard Mitchell Edwards, who served in the 5th Infantry during this campaign. I have not found a digital copy yet (if someone out there reading this has a copy, please send it along).

[This connection to this chapter of Mexican history is also interesting for me given my Mexican heritage from Mom's side of the family tree via my Granny, Lydia Campuzano Reid. I'll have more on the Campuzanos from Sonora in future posts.]