Here is the remainder of the Mexican War pension file described yesterday (see Part 1). I have inserted spaces where necessary for readability of the text, with photos to be posted separately.

Affidavit of Walker McCrary, 20 March 1861
The undersigned Walker McCrary, a citizen of Sullivan County, Te[nnessee], Blantville PO [Post Office?] states that he is that individual so named who was a private in Capt. Shaver's Co 5 Te[nnessee] Vols in the late war with Mexico; that I well knew one Robert Jones who was a member of Capt Reese's Company in the same Regt. We now discharged together at Memphis, Te[nnessee] on July 1848.

At that time said Jones was very feeble from the effects of Diarrhea, and the medicine which he had taken to alleviate his condition. We left Memphis, Te[nnessee] together aboard a steamboat to come by water, to our homes in East Te[nnessee]. There was several of the returning volunteers aboard of the vessel. In the state said Jones was in very feeble health, laboring under the diseases he had contracted in the service, Diarrhea mainly; and his mind was evidently effected by the diseases which he contracted in the service and the medicines, morphine & quinine, which he had taken to relieve his condition.

Whilst in this condition, suffering from disease & [unreadable] he walked overboard, into the river, as the boat was progressing to his destination; the exact date & place, I cannot state. I distinctly remember of him going overboard and going apparently voluntarily & not by accident for the [unsure of word] to he out of his mind, and I ran to help him & throwing a rope overboard to enable him to come upon board, but he did not seem to mind it and he was drowned. He was not drinking at the time and I do not think he was a drinking man. The cause of his going overboard, as I then understand and saw it was the bewildered state of his mind brought upon him by the effects of the disease contracted in Mexico and the medicine taken to relieve them. The date was in probability the same month and only a few days or hours after our discharge, which was the 20 or 21st July 1848. I have no interest in this claim.

Sworn to and subscribed before me on this 20 March 1861. And I certify that said McCrary is a credible witness; and that I have no interest in this claim.
E. K. Bachman {Seal} for Sullivan Co.} [Signature of Walker McCrary] 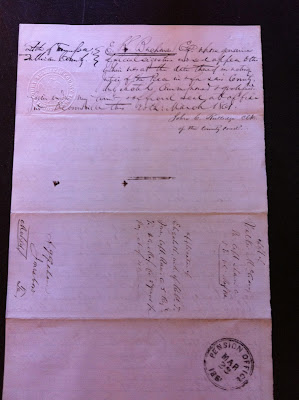 Sir, I forward herewith additional evidence in the claim of Elizabeth, wid. of Robert T. Jones for a pension, act July '48.

The case is a peculiar one, and is, as I judge, a just one. Jones was discharged very much afflicted, in feeble health & the diseases & their remedy had operated upon his mind so as to produce bewilderment, perhaps insanity - partial insanity at least. I believe it is held that suicide produced by some disease or injury of the service is sufficient to justify the allowance of a pension; this being so, as this man deliberately walked overboard, not be accident, but from aberration of mind, not meditating suicide ever perhaps but not faced to do so by the [unsure of word] of disease and medicine, the widow is justly entitled to a pension. I hope you will so consider or allow it.

It is extremely difficult to get proof in a case like this. Only by accident yesterday, this I find the man who endeared to rescue Jones when he walked overboard & who saw him do the act & who knew the condition of his mind. He says he walked deliberately for said, in a set of staggering way, as this on the land and plunged into the river, and when he threw a rope to him made no actions but was drowned, as tho he was a log of wood or rather a stone making no actions to save himself. I hope you will allow the claim. I think the surgeon of the Regt is dead. If it was Dr. Parshall, I know he is dead.

Have you allowed the Mary A. Bridges claim yet?

Geo. C. Whiting Esq, Clerk of Peace A.G.}
--
The Dr. Parshall listed in Graham's letter was John Parshall, surgeon of the 5th Tennessee Infantry. I found his record on Fold3.com. The Mary Bridges mentioned could have been the wife of Thomas Bridges, Co. F, 4th Infantry, but I'm not sure.

The last two documents in the file were two Pension Office letters. These were written in pencil and were difficult to read. I've done my best with the transcription and added some line breaks for readability. The first letter is a reply to Justice A.G. Graham.

In reply to your letter of the 21st March I have to state that if a soldier contracted a disease while in the service and line of duty, from which proceeded mental derangement under the influence of which he should take his own life by drowning or otherwise, his widow would be entitled to a pension on the facts being clearly established.

In the case of the widow of Robert T. Jones, the witness Walker McCreery [sp], testifies to his walking overboard and being drowned, and expresses the belief that his mind had become affected on account of long and severe Diarrhea. There's a possibility that such a disease might affect his mind, and lead to the consequences stated, but no satisfactory proof thereof has been addressed. Unless it could be shown by the surgeon or asst keeper [?] of the Regt, or by a Commanding Officer of his Company, that the soldier contracted the Diarrhea while in service and that have its severity and long standing mental aberation resulted which way clearly visible at the time and prior to his discharge from the army at Memphis, it cannot be admitted that his death ad any connection with his military service.

Letter from the Pension Office, 11 January 1863
The papers of Elizabeth Jones, widow of Robert T. Jones, who was a private of Capt Reese's Company, 5th Rgt Tennessee Volunteers, have been received and filed.

The letter shows that he entered on the 10th November 1847, and that he was discharged at Memphis by expiration of service on the 20th of July 1848. There is no evidence to show that he was suffering from any disease while in the service.

In the Affidavit of Miles Jones, which accompanies the widow's application, it is alleged that the husband contracted the Diarrhea under which he labored when he was discharged, and that while on his way home, and from derangement occasioned by disease, he walked overboard from the steamboat and was drowned. He does not say although he leaves it to be inferred, that he was in Company with him at the time.

In such a case as this, it will require very clear and satisfactory proof to establish the claim. In the first place the testimony of the nature of the disorder under which the husband labored when he was discharged, that it was incurred when in the line of duty, and that it was of such a character as to produce mental derangement and secondly evidence in addition to that of Miles Jones to show the condition of this soldier while on board the steamboat and the circumstances connected with his death.

Am A G Watkins
--
Some Final Thoughts
The rejection of the pension application definitely seems unjust. It really is unfortunate that the letter of Justice Graham and affidavit of Walker McCrary was not convincing to the Pension Office.

As for McCrary, 5 October 1861, he entered the Confederate Army (Co. K, 26th Regiment Tennessee Infantry). He died of wounds received in action at Fort Donelson on 15 February 1862.

A.G. Graham is mentioned in Goodspeed's History of Washington County, Tennessee as "an eccentric attorney from the North."

I am looking further into the connection with Miles Jones, to see if he was a cousin of Robert or related in some way.

Elizabeth Jones lived to be about 71 years old, and lived with her daughter Sarah Melissa Jones and her family in her last years. In the 1870 US Census, she appears in the household of William G. Daniel in Talbots Station, Jefferson County, Tennessee.

Sarah's son, Frank Daniel appears in this record as 4 years old. When Frank Daniel was older he passed the story of Robert Jones to his nephew, Forrest Wayne Daniel (son of his brother William Alonzo Daniel). Frank was told dysentery had broken out aboard the ship the discharged men were taking to get back home, and when Robert Jones walked out on a board on a side of the ship to throw up, he fell overboard and into the Mississippi River. This is the story that was passed down through oral history through the years. The documents in the Pension file are not too far off from this story.

Posted by Patrick Jones at 8:41 AM