Monday's Part 1 on the Civil War pension file of my 3rd-great-grandfather, Joseph Thomas Jones, prompted some excellent pointers from fellow Jones-Thornhill researchers and distant cousin Lynne. She has previously reminded me about the Diary of Kate Livingston, which was written between 1859 and 1868 by a girl living in Panther Springs (present-day Hamblen County). Catherine (Kate) Livingston (born in 1841) was the daughter of preacher Samuel Livingston, and would have been a neighbor of the Jones and Thornhill families. This diary references the shooting of Joseph Jones and Captain John Thornhill.

The diary has been scanned by the Jefferson County Genealogy & History website and I am very thankful that this diary is available for researchers to use today.

Below is an extract from page 83 of the diary, showing an entry from 3 September 1863 where "the Yankee cavalry passed through Panther Springs en route for Morristown...saw Thornhill Jones &c." 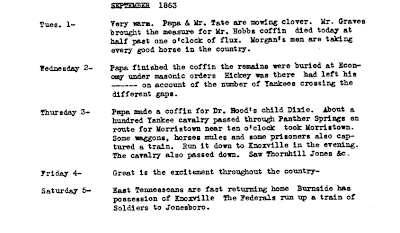 Livingston describes the killing of Captain Thornhill on her entries for 24-25 June 1865:

I'll have more on the Thornhill case in the future post, but the fallout from his death went to the US Supreme Court and back to the Tennessee Supreme Court. Rankin v State, 78 US 380 (1870) references the killing of Captain Thornhill by men of the 9th Cavalry.

In Joseph's pension file, the deposition of Eliza Line of Panther Springs (taken in 1886) describes Jones returning to help his cousin Captain Thornhill, and the shooting of Joseph in December 1864. She states:

"I knew Joseph Jones from boyhood. I knew him in Jefferson County and also in this C[ounty]. We moved up here in October 1862. He was gone in the service or for that purpose.

Sometime near the close of the war, I can't say when, Jones returned home. At the time his home was about a 1/2 mile from here. I understand that Parsons & Thornhill had some trouble about who should hold a certain rank in the command [of the 9th Cavalry] & Thornhill got mad & came home. Jones was a cousin of the Thornhills and came home about the same time, so did other of the boys who sympathized with Thornhill. They came home on that account. I think it was 1864 that Jones was shot."

One day Jones borrowed my husband's saddle and fearing Jones might get off again, he went down to his house and the next morning he came to see about it. While at Jones' house, 14 rebels rode up before they knew about it. One of them injured his horse, pulled his pistol down. Jones jumped up to get his pistol that was on the bed and the rebel shot him in the right arm. My husband was shot through the muscle in the left arm. Jones said they fired but once but my husband said they fired twice. I was not there at the time but my husband told me this when he came home that morning. When he got home he took his coat off and the bullet dropped on the floor, it had lodged in his coat sleeve.

The rebels started off with Jones but they thought he was hurt so badly that he would be an expense on their hands so they let him go. They did not take my husband because he was not a soldier. I aint certain just when this was but it was cold weather. It was either the last of 1864 or in the first of 1865 I am not certain.

Did you understand Jones had a furlough at the time he came home?

No I don't know either way but the general understanding was he came home because they had trouble in the County. I did not see Jones at the time he was shot but I saw him after he got well. My husband knows all about the shooting. I don't remember hearing a word about Jones or the others being deserters."

--
There's more to the story, and its connection with Captain Thornhill.
Posted by Patrick Jones at 9:53 AM