As I am researching the pensions granted to the survivors and widows of Company G, 5th Infantry Tennessee Volunteers, I thought it would be helpful to post a copy of the Act of 29 January 1887, the Mexican Veteran Pension Law. 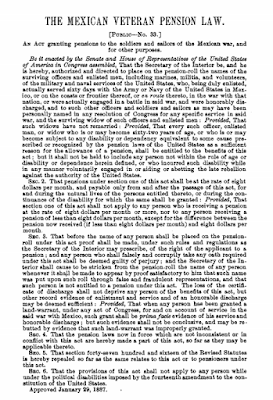 The Mexican Veteran Pension Law was passed 8 years after Elizabeth's death. Elizabeth Thornhill Jones filed papers referencing the Act of 14 July 1862 and Act of 6 June 1866. The act of 1866 was an amendment to the act of 1862.  This prompted me to look up the law in place when Robert Thomas Jones Sr died in July 1848 and when Elizabeth filed her pension applications.

There is a book written by John William Oliver titled History of the Civil War Military Pensions, 1861-1865, U. Wisconsin, 1915 (see Google Books, http://books.google.com/books?id=zOdRAAAAMAAJ&pg=PA1#v=onepage&q&f=false). This describes the laws of 1862 and 1866 covering the Civil War, which is interesting but doesn't explain the situation for soldiers & widows of those who served in Mexico.

I did some more digging, and it appears the law in effect when Robert Thomas Jones Sr. mustered out of service in Memphis, Tennessee on 20 July 1848 was an act approved on 10 July 1848, granting bounty land to men who served in Mexico.

So, Robert Sr was entitled to bounty land from his service in Mexico.

On 21 July 1848, Congress passed "an act granting half-pay to widows and orphans where husbands and fathers have died of wounds received in the military service of the United States." 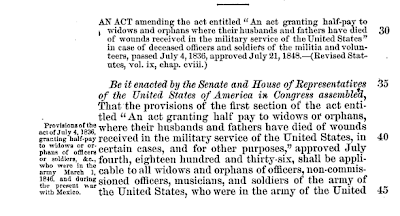 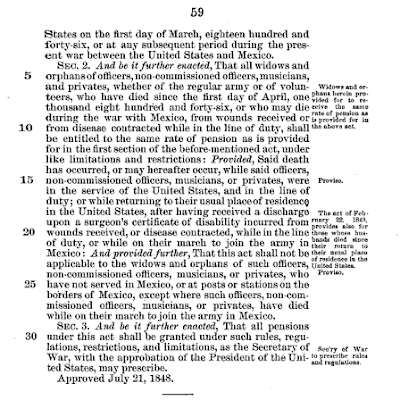 This law was approved one day before Robert Thomas Jones Sr fell overboard and drowned in the Mississippi River on 22 July 1848. A key passage in this law was Section 2 "all widows and orphans of officers, non-commissioned officers, musicians and privates...who may die during the war with Mexico, from wounds received or from disease contracted while in the line of duty, shall be entitled to the same rate of pension as is provided for in the first section of the before-mentioned act, under like limitations and restrictions: Provided,...while returning to their usual place of residence in the United States, after having received a discharge..."

As was the difficulty in Elizabeth's case, for her husband, she had to prove that his death was caused by disease contracted in the line of duty in Mexico. The Pension Office did not believe she had sufficiently proven this.

Elizabeth should have at least been entitled to the allowable pension for her son, Robert Thomas Jones Jr, who died at Muscle Shoals, Alabama in December 1847, on the march down the Tennessee River on the journey to New Orleans and Mexico.

By 13 February 1857, the Committee on Revolutionary Pensions recognized the difficulty for widows to prove whether their husband had died from disease contracted in the line of duty. At least one of the pensions granted in the 1857 set includes a Mexican War veteran (Lt. Thompson Crosby).

--
Copy made from William Hugh Roberts' Mexican War Veterans, A Complete Roster dated 1887. Note - This only covers officers and enlisted men, not regular volunteers.
Posted by Patrick Jones at 11:48 PM