This is the third in the series reviewing the pension application files of the surviving men or widows from Company G, 5th Infantry Tennessee Volunteers from the Mexican War.

Just like the previous two posts, I am not connected to these men except that they served with my 4th-great-grandfather Robert Thomas Jones Sr and his son Robert Thomas Jr in Company G. I hope that descendents of these men will find this information for their own family history research.

Out of this third set, three files were missing (Collier, Hickman, Manning). 11 in this set received a pension, bringing our total to 22 men or their widows from Company G receiving a pension from their service in the Mexican War.

Robert Collier
Collier's pension file was not available, as the staff at the Archives informed me that the file is currently at the Department of Veterans Affairs in Washington DC. Interesting. I know from the pension index that Collier's widow, Mary Catherine Collier, filed for a widow's pension.

I also know that Collier signed an affidavit on behalf of fellow Company G soldier Shadrach W Haire from Greene County, Tennessee on 18 September 1872. His account is fascinating.

Shadrach Haire was born on , and he died on 6 March 1867 in Columbus, Georgia. Mary's pension was filed from Hazel Springs, Washington County, Virginia. Her maiden name was Fields. Mary Ann and Shadrach were married on 4 October 1849 in Greene County, Tennessee.

The record notes that Haire became afflicted with "Diarrhea" [likely yellow fever] while in Mexico, and upon his return from service he worked as a carpenter but dealt with the disease for the rest of his life before he died in 1867. According to Collier's affidavit, Haire served as the cook for Colonel George McClelland while they were stationed at National Bridge in Mexico. It is a sad story what happened to Haire after he contracted the disease. Collier's affidavit is included below. 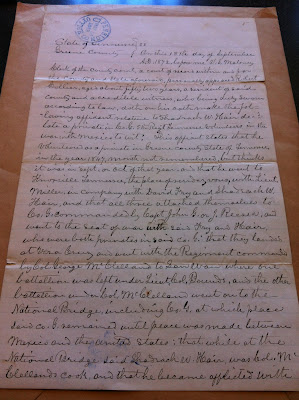 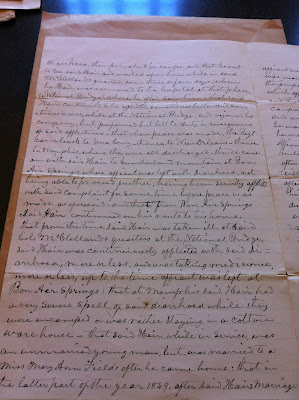 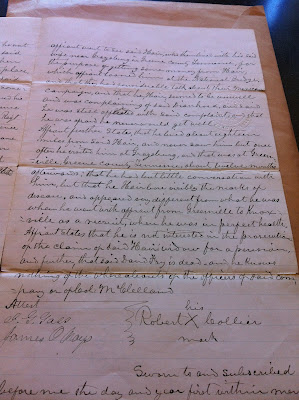 Henry Hickman
The file for Henry Hickman was not available. I will re-check the number and try again at a later date.

William R. Copeland
Copeland received a survivor's pension, filed from Red Hill, Marshall County, Alabama. He was born on 23 January 1821. He was married at Red Hill, Alabama to Sarah Manerva Culbrecht on 10 September 1850. This was his second wife.

Jane Loftey Crow received her widows pension for Caleb Crow. She died before 10 January 1898, when she was dropped off the roll by the Pension Office.

Crow's file included a letter signed by Lt. John A Miller (see Company G Update #1) on 29 November 1892 from Santa Rosa, California. Miller states that he distinctly remembers Caleb Crow was a member of Company G, and he notes that the company "was composed almost entirely of farmers sons from the counties of Greene, Hawkins, Jefferson and Sevier."

Miller continued, "While I cannot myself give the information required to assist the widow of Caleb Crow, to a place on the pension rolls. I will submit your letter of inquiry to another member of our company who I think can give the required description. Jacob Miller of Russellville, Hamblen Co. Tenn. will tell you what he remembers of his comerad (sp) Crow, and enclose to the Pension Office at Washington."

James Ferguson
Ferguson was born on 24 May 1832 in Jefferson County, Tennessee, and died on 1 December 1889 at Fort Gaines, Georgia. Ferguson received a pension. He married Elizabeth Darnell in Grainger County, Tennessee on 21 March 1849, after returning from Mexico.

In his application filed from Knox County, he states that he was 62 years old on 22 January 1887. His application was also witnessed by Eli Blair, a fellow volunteer in Company G. Ferguson's occupation is listed as marble cutter.

Elizabeth Darnell Ferguson filed a widow's pension application. Her file included an affidavit signed by Jacob Hodges who states that he served in the 5th Infantry with Ferguson. Elizabeth died on 7 January 1907.

William L. Hudson
Hudson received a survivor's pension and moved west to San Francisco, Sacramento, and briefly Los Angeles before returning to Sacramento. He was born on 3 February 1828, and died sometime after 1901. He was dropped from the pension rolls in 1904.

Francis A. Irwin
Irwin received a survivor's pension. His widow Levina Irwin's pension application was rejected. The file contains a letter from the Pension Office in Pleasanton, Kansas asking the office in Washington DC what amount of income was sufficient to debarr a pension claim. Levina Irwin had property worth $3,500 and income in the amount of $350 per year. The pension office states that she was 50 years old and not disabled at the time on 14 April 1894.

Levina McHenry married Francis A. Irwin in Prescott, Kansas on 3 September 1890. Irwin died near Prescott, Kansas on 12 January 1894 of pneumonia. During his life, he signed an affidavit on behalf of fellow Company G veteran Andrew J. Potts, who was also in Kansas after the Mexican War.

Benjamin Manning
I am rechecking the number on this one. His widow Mary Manning filed a pension application.

Jacob Miller
Jacob Miller was born on 5 May 1824. He never married. After returning from the Mexican War, Miller lived in Russellville, Tennessee. It appears he frequently supported fellow Company G veterans by writing affidavits for their pension files, or for their widows. For the files I have reviewed so far, Miller signed affidavits on behalf of Wiley Cozart, Sarah Purkey Couch (widow of William Couch), Isabella Potter (widow of Paul Potter), and he was referenced by John A. Miller in Jane Loftey Crow's widow's pension application as a person who could help with pension applications.

James C. Myers
James' widow Sarah C. Abel Myers filed a widow's pension but was rejected, as she died in May 1887 while the Pension Office was reviewing her application.

Isabella's pension application filed on 17 January 1887 was initially rejected. Her next attempt was accepted.

Potts married Mary Burton on 18 July 1897, and she filed a widow's pension application from Pottawatomie County, Oklahoma. Mary was apparently still married to her first husband. From the file it looks like her maiden name was Rankin.

Potts had filed an earlier pension request in 1852, which was rejected. He claimed that he had been accidentally shot in the knee by a fellow soldier at National Bridge, Mexico.

Thomas Spurgeon
Spurgeon received a survivor's pension. Thomas Spurgeon was born on 2 December 1826 in Greene County, Tennessee. He was living in Coldwater, Wayne County, Missouri. I didn't take other notes on the file.

Delila Phillips Stafford filed a widow's pension on 31 December 1887 from Bakersville, Mitchell County, North Carolina. She was born on 16 June 1812 in Elberton County, Georgia, and that her marriage to Stafford was on 1 August 1840 in Newport, Cocke County, Tennessee. He had left and had been gone from the marriage for 19 years when she filed for a widow's pension. She had never remarried.

Sallie Ann Brown Stafford also filed papers in this case. I did not copy those, but ultimately it appears that Delila Phillips Stafford received a widow's pension.
Posted by Patrick Jones at 3:34 PM