A benefit of working in an office within walking distance of the National Archives is that on occasion, a lunch break can result in opportunities for family history research. Yesterday I wrote about the War of 1812 pension index card for Manuel Lamon. Later in the day I was able to see the pension file. I hope this information is useful for others descended from Manuel Lamon and Mary Magdalene French Lamon.

Early Years, Marriage, Children
Manuel Lamon was the son of David Lamon and Catherine Strickler. He was born on 17 March 1789 in Washington County, Tennessee. Mary was born on 5 April 1789. At the age of 21, on 6 December 1810, Manuel married Mary Magdalene French in a private ceremony held in either Washington or Greene County, Tennessee (the pension file notes both locations as the place of marriage, Mary's statement says Greene County).

Other researchers have listed Mary's middle name as "Madoline", but it is listed as Magdelane and Magdalene throughout the file. She used the spelling Magdalene in the 3 April 1871 widow's application, so that's what I'll use here.

Manuel and Mary Magdalene had eleven children. Their names and birth dates are recorded in the pension file in Manuel's own handwriting, signed in 1844. I'm descended from David Detrick Lamon. 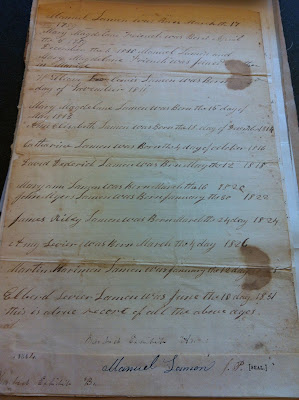 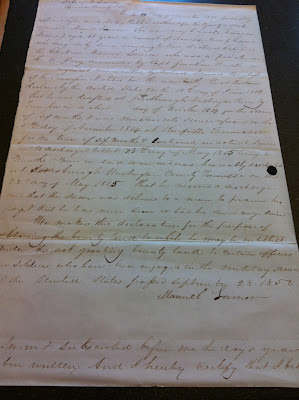 It appears that Mary gave birth to Ann Elizabeth Lamon while Manuel was in the Militia, and they had 8 children after he returned from service.

War of 1812 Service
Manuel Lamon served in Captain Jonathan Waddle's Company of the Tennessee Militia, commanded by Samuel Bayless. Manuel states in 1850 that he was drafted at Jonesborough, Tennessee on 15 October 1814. Mary's 1871 pension application states that he joined in Greeneville, Tennessee. Manuel mustered into service on either 5 or 13 November 1814 from Knoxville (there are conflicting dates in the file). He was honorably discharged on 23 May 1815 at Jonesborough, Washington County, Tennessee. The file states that he was listed as "Emanuel Lamon", but he signed his name as Manuel Lamon. This also shows he served with his brother Joseph Lamon.
Manuel received 80 acres of bounty land for his service from his initial application, and an additional 80 acres of bounty land in 1855. 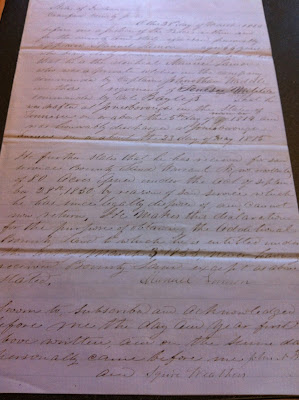 Mary submitted a widow's pension application on 3 April 1871 from Leavenworth, Crawford County, Indiana. The application was witnessed by her son, John Myers Lamon, and John N. Baker. Mary was granted a pension of $8 per month on 17 November 1873, with the delay caused by some confusion over the spelling of Manuel's name according to the military, and a missing marriage confirmation.

Final Resting Place
Manuel Lamon is buried in Ray's Chapel Cemetery - Langs Cemetery, White Cloud, Harrison County, Indiana.
According to the biography of son Elbert Sevier Lamon in the Biographical and Historical Memoirs of Adams, Clay, Hall and Hamilton Counties, Nebraska (1890), Manuel Lamon "was a man well known and highly esteemed for his many worthy qualities, and was for twelve consecutive years magistrate in this district [Harrison County, Indiana]." 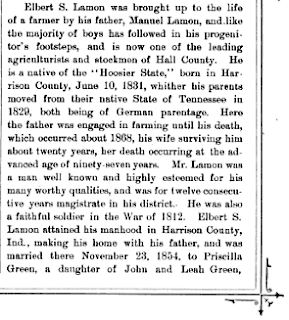 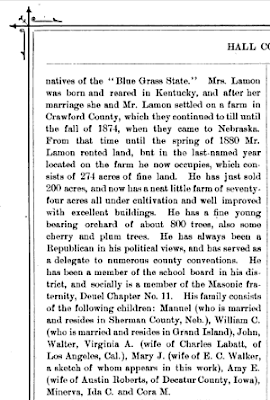 Mary Magdalene French Lamon never remarried, and lived to the age of 91. She passed away on 7 March 1881 and is buried in Rays Chapel Cemetery - Langs Cemetery in White Cloud, Harrison County, Indiana.
Posted by Patrick Jones at 5:59 AM