While looking around on Ancestry, I found a few records that I had missed previously for my great-grandfather Plutarco Campuzano's sister, Concepcion "Concha" Campuzano. She had first married John Dobson in Pinal County, Arizona. At some point prior to 1925, she separated from him, and settled with Italian immigrant Samuel Polito (formerly Ippolito). Concha and Sam married in Tucson on 16 May 1929, after the birth of two of their three children.

The marriage record from May 1921 indicates Concha was 19, but really she was 17 at the time. 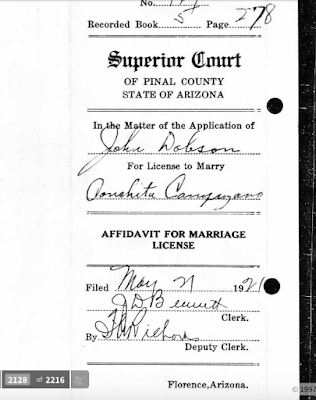 John Dobson was a brother of Edward Dobson, who also married a cousin of Concha's, Rosaura Campuzano. Rosaura was a daughter of Jose Jesus Campuzano, brother of my 2nd-great-grandfather Vicente Campuzano.
Posted by Patrick Jones at 7:15 AM