A Note on my Granny

In writing about the Campuzano family this month I had failed to notice how quickly time passes. Two years ago my Granny, Lydia Campuzano Reid, passed away. She lived a long, adventure-filled life. She was the second child of Plutarco Campuzano and Manuela Portillo, born on 28 April 1926, part of the first generation from the Campuzano family born in the United States.
In 2008, my Granny told me the story of how she spent a month visiting her aunt Isabel Portillo Cruz in Los Angeles in 1941 or 1942. She said she saw a young Frank Sinatra play at the Palladium (the Hollywood Palladium on Sunset Boulevard). I did some research, and in 1941 Sinatra was still with the Tommy Dorsey Orchestra but he went solo in 1942. Either way, it's a great story. In March I posted a photo of my Granny with her cousin Armando Cruz at Long Beach.
Lydia married Leo Morris Reid on 18 September 1945 in Lincoln, Nebraska. Grandpa Leo was stationed at Davis-Monthan Air Force Base in Tucson when they met. They moved to Indianapolis, Indiana and had three daughters - my Mom, my Aunt Patty, and my Aunt Linda. Leo had a son Wayne Reid, from his previous marriage which had broken up before he entered service in the Air Force.
My Granny set a great example for me and so many others. Below is a copy of the memorial flyer from her funeral two years ago: 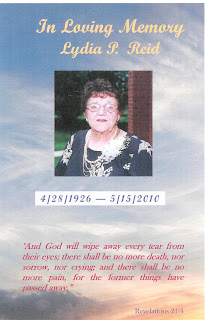 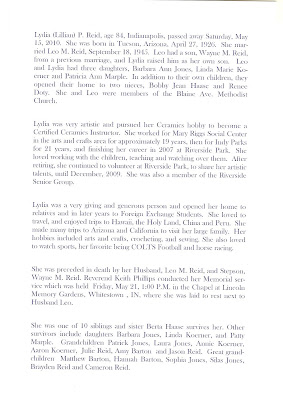 Posted by Patrick Jones at 5:37 AM