Brick Wall on the Oyler-Hise line

It is not surprising in genealogy research to run into brick walls. My third-great-grandmother Mary Ann Hise (also spelled Haise or Hais) is one example. Mary Ann was born on 24 November 1827 in Germany. So far, we have not been able to identify when Mary Ann arrived in the US.
Mary Ann married Samuel Oyler in Dearborn County, Indiana on Christmas 1850. A copy of their marriage record is below: 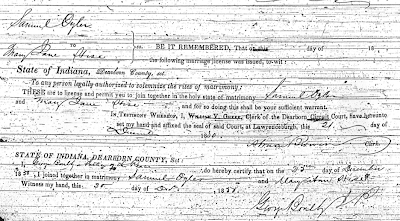 I've already noted in an earlier post on her son Charles John Oyler, that Mary Ann was living in the household of her father-in-law George Oyler in the 1870 US Census. This is after young Charles had been sent to Tippecanoe County, Indiana to live with his aunt and uncle following the death of his father Samuel Oyler.

Mary Ann Hise Oyler died on 15 April 1872, while she was in Chillicothe, Ross County, Ohio for her daughter Elenora (Ellen) Oyler's wedding to Johan Schiffer. A copy of her obituary is below: 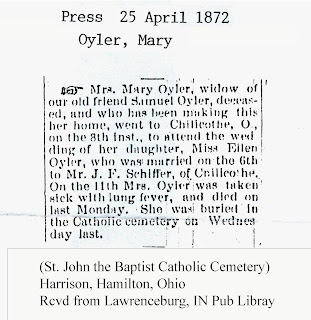 [Note - thanks go to cousin and fellow Oyler/Hise researcher Susan Heuchert for this information].

Posted by Patrick Jones at 8:28 AM