In February, I posted a photo of Agnes Lydia Allman and Charles John Oyler. Agnes' father was my third-great-grandfather William Allman, and he is one of my bigger brick walls on my Gumpy's side of the family.

William Allman appears on the US Civil War Draft Registration Records, 1863-1865 in Vance Township, Vermilion County, Illinois. He is shown as married, from Ohio, and 26 years old.

There was also a Levi Allman (age 20) in Company C, 125th Illinois Infantry from Carroll County, Ohio. Levi Allman was residing in Vance Township, Vermilion County when he joined the Union Army. He's listed as 5'8", with dark hair, blue eyes and fair complexion. He joined on 1 August 1862 and died on 2 April 1865 of wounds received in battle at Bentonville, North Carolina on 21 March 1865. He is buried in Raleigh National Cemetery in Wake County, North Carolina. I believe this was William's younger brother. In the 1860 US Census Levi Allman was living in the household of William Davis in Vermilion County.

In the 1870 Census, William and family were in Vance Township, Vermilion County, Illinois. 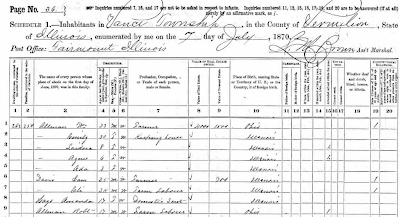 There is a 17-year old Robert Allman in the household from Ohio as a farm laborer. I think this was another younger brother of William's.

I have not yet been able to track down the parents of William (or Levi or Robert Allman) in Carroll County, Ohio.

According to the papers passed down to me by Robert P. Jones, and written by Alma Maude Oyler, "Family Record of Maternal Grandparents, Wm and Emily R Davis Allman":

"A daughter Emily Rachel (our grandmother) married Will Allman who had come horseback from Ohio - His clothes shipped by train were three months on the way. He made walnut chest put together with wooden pegs.

The Allmans lived in a log cabin first house east of Davis homestead. In 1875 the present house was built, but Will Allman passed away before it was finished."

The notes also state that William Allman "died of pneumonia brought on by ditching in cold, wet spring weather."

William Allman was buried in the Davis Cemetery, located about 1 1/2 miles north of Fairmount, Illinois.

I will have more on Agnes Lydia Allman and her siblings.
Posted by Patrick Jones at 10:26 AM