This photo is of my grandfather, Leo Morris Reid (second from the left on the wing), with fellow Air Force pilots. Most likely this was taken some time between August & October 1944 in Merced, California, when he was stationed there for flight training. I think the plane is a BT-13A. 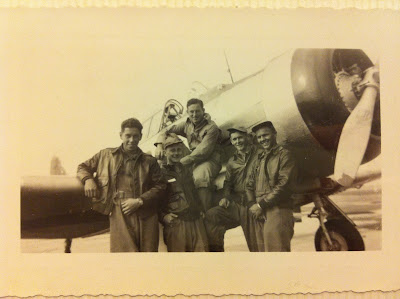 I don't know who the other pilots are in the photo. In any case, it's a great shot, from a photo album passed down to my Mom.

I'll have quite a bit more on Leo and his Air Force service in May & June. I have his original pilot logs (which is why I'm placing this photo between August & October 1944).
Posted by Patrick Jones at 5:29 AM