I am looking back again at the creation of Wabash County, Illinois, a sliver of land along the Illinois border facing the Wabash River and Indiana directly east. As I wrote yesterday, John Og McIntosh was integral in the formation of Edwards County, Illinois in 1814. By the time Wabash County was created in 1825, McIntosh was well into retirement from public service, living in the northern corner of the county between Friendsville and Allendale. John appears on a list of original property owners along with another familiar name, Asa Smith.
The book indicates Asa Smith settled in the area that became Wabash County in 1818. He recorded this land on 6 April 1825, totaling 81 acres in the west half of the southeast quarter of Section 5, in Township 1, North of Range 12 West. The land was assigned from Cornelius Vanderhuff. 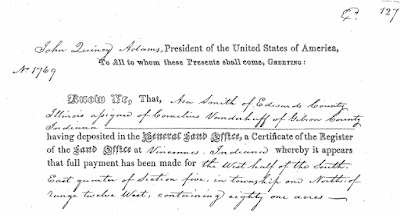 The image from page 285 of the Combined History of Edwards, Lawrence and Wabash Counties gives a sense of what the land was like after this area was settled by the pioneering families.

Posted by Patrick Jones at 8:35 AM