Last week I wrote about Librada Campuzano de Ayón, the older half-sister of my 2nd-great-grandfather Vicente Campuzano. I have found additional documents for Librada, identifying the name of her husband and locating two children. Librada was born in Arizpe, Sonora in 1829. At some point, she met Jesus Ayón, who was from Ures, Sonora. They had at least two children - Jose Polonio Guillermo Ayón and Alejandra Ayón. Alejandra was born 1850 in Ures. At some point, Librada and family went from Ures to the port city of Guaymas.
Alejandra married Fernando Pesqueira in Guaymas on 14 November 1874. The civil registration document for Alejandra and Fernando references Alejandra's grandparents, Vicente Campuzano and his first wife Benancia Gutierrez. Based on the information in this document, Vicente was dead by 1874, but Benancia was still alive and listed as 60 years old. The parents of Jesus Ayón are also listed as Jose Ayón of Alamos, Sonora, and Maria Ygnacia Espinoza of Sinaloa. Both were still living and at the time were in Guaymas. 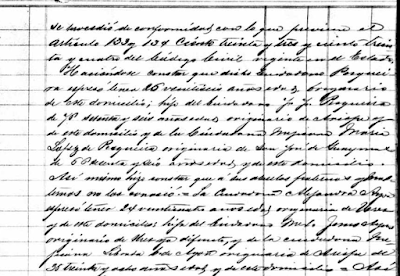 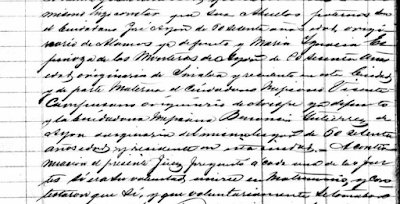 Alejandra provides a link with the Calles family, as she hosted the marriage of Belisario Moreno and Aquila Calles on 14 August 1885 in Hermosillo. Aquila was a daughter of Maria Jesus Campuzano (Librada Campuzano's younger sister) and Francisco Calles. I will have much more on the connection between the Campuzano and Calles family in a subsequent post.

I do not yet have death dates for Benancia Gutierrez de Campuzano, but anecdotal information shows that she may have died in Guaymas. This is also where her daughter Maria Jesus Campuzano died in 1880. This port city clearly played a role in the lives of several branches of my Mexican side of the family.
Posted by Patrick Jones at 8:40 AM