In May 1863, a young Irishman joined the 37th Infantry, Union Army in Glasgow, Barren County, Kentucky. On his muster roll card he's listed as 26 years old, the same age he was listed as in the 1860 US Census in Barren County. Patrick Cain mustered into service on 17 September 1863 in Company A of the 37th Infantry.
Cain was absent from service in November and December 1863, but was listed as present in January and February 1864. He remained in service until he was discharged on 29 December 1864. 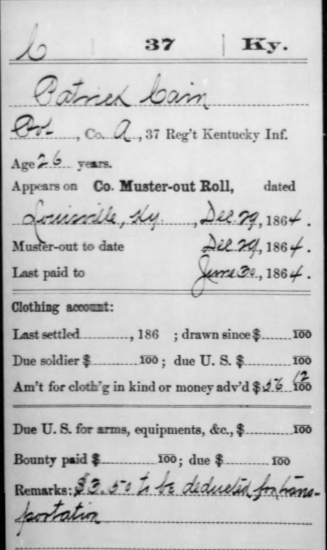 A card from the Civil War and Later Veterans Index shows that Cain filed a pension application in June 1880, and that he died on 15 November 1913. 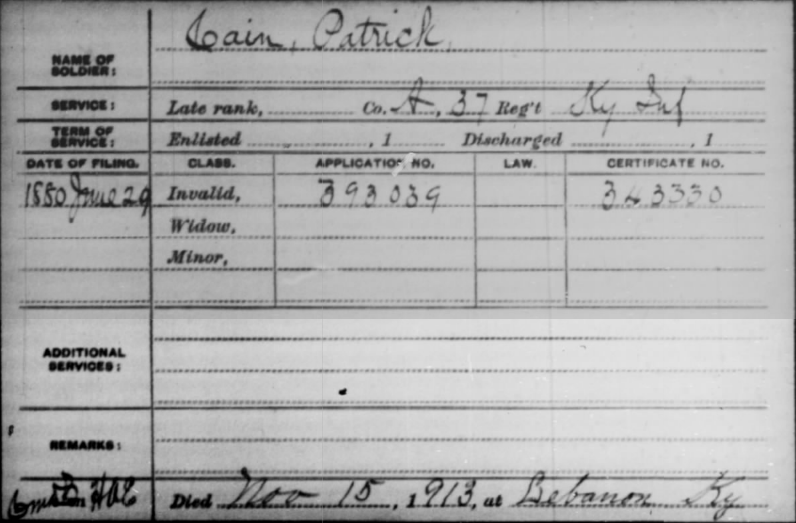 I put the death date into Findagrave and found a photo for his headstone, along with the name of his wife, Julia Cain, in Marion County, Kentucky. It looks like I will have to make another visit to the National Archives in DC to see Cain's pension file. This may be a stretch, but I wonder if this Cain is connected to my second-great-grandmother Mary Alice Cain Read and her brother Harl P. Cain.

Back to the 1860 US Census, Cain (age 26) is living in the household of Edmond and Honora Halloran, both of Ireland, and their children Ann and ten-month old Patrick. My guess is that Honora is the sister of Patrick, but I don't know if this is correct.

The couple are buried in Saint Augustine Church Cemetery in Lebanon, Marion County, Kentucky.
I do not yet have other information on Patrick Cain and his potential connection to my Cain ancestors. I am hoping this possible lead helps break through the brick wall for Mary Alice and Harl.

Posted by Patrick Jones at 8:51 PM