While browsing the Indianapolis Marion County Public Library's Digital Collection, I ran across a great find in the January 1938 Arsenal Cannon yearbook. My Gumpy, Keith D. Jones, appears in the middle row on page 35 for the 1937 Arsenal Tech football team. He wore number 18, the same number quarterback Peyton Manning wears today. I've heard stories of my Gumpy's days when he played football, but until now had never seen a picture of him in uniform. I understand he played backup quarterback and receiver.

From the January 1937 Arsenal Cannon yearbook, it looks like Gumpy played as a lineman, he wore number 61. 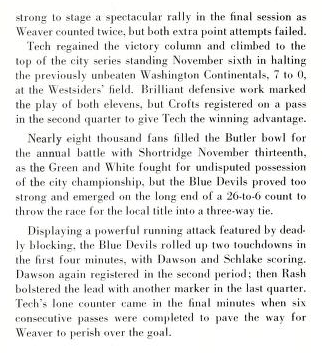 Gumpy appears in the January 1936 Arsenal Cannon (1935 football), he's the last player in the picture on the third row, barely in a practice squad uniform. To go from last on the team two years earlier to key player in his senior year is an achievement, as well as playing in front of 10,000 fans at the Butler Bowl in the school's rivalry game against Shortridge. It's great to see this now, knowing the years of hard work I put in as a multi-sport athlete in high school and later college swimmer. I think our kids will enjoy seeing this too.
Posted by Patrick Jones at 10:54 AM