Witnesses to a Widow's Pension

In early April, I wrote about my 3rd-great-grandmother Easter Vail Armstrong. Her parents, my 4th-great-grandparents, were James Vail and Selina Hampton. In the month of September and October, I am going to spend some time retracing and untangling the family of James and Selina, in the hopes of breaking through to identify James' parents and the part of Ohio that James came from. I have quite a bit on Selina's parents, and her connection to the Hampton and Booher families of Sullivan County, Tennessee.

James and Selina were married on 28 March 1839 in Montgomery County, Indiana. I lived in Montgomery County between 1992 and 1996 while attending Wabash College. I am going back to talk at the College in October, so I hope to also uncover more information about them during this short visit.

While looking on Fold3.com for Civil War records on the Vail family, I stumbled onto the widow's pension file for Mary Ann Darby Coltrain, widow of Linden P. Coltrain. James and Selina Vail were witnesses on her pension application. Linden and Mary's daughter, Rebecca Ann Coltrain, later married James and Selina's son Leander Vail on 9 April 1870, after Leander returned from service in the 68th and 44th Indiana Infantry during the last year of the Civil War. 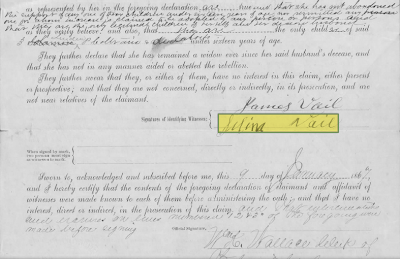 The pension file notes that Linden served in the 72nd Indiana Infantry, and that he died of chronic diarrhea in the field hospital on 10 May 1863 at Murfreesboro, Tennessee. Seeing this makes me think that he must have contracted malaria or yellow fever, and died from a similar battlefield-contracted disease that lead to the death of my 4th-great-grandfather Robert Thomas Jones Sr during his return from the Mexican War.

There is a lot of information in this pension file. If you are descended from Linden P. Coltrain, you will want to see this file.
Posted by Patrick Jones at 10:38 PM