Workday Wednesday - A Barber in Tempe

I continue to try to unravel the Campuzano connections in Arizona during the early 1900s. In May I wrote about my 2nd-great-grandfather, Vicente Plutarco Campuzano, and how he was living in Tempe, Arizona in 1915. Another Campuzano shows up in the US City Directories for Tempe and Phoenix during this same time, a barber named Antonio P Campuzano. I wonder if Antonio was a brother of Vicente. 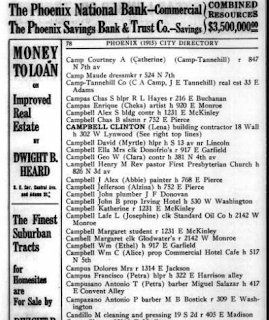 Antonio appears twice, once with wife Petra at 417 E. Convent Alley, and a second entry showing an address at 309 E. Washington.

In the 1918 Tempe Directory, Antonio is located at 300 Mill Avenue.

He also appears in the business directory for barbers in 1918: 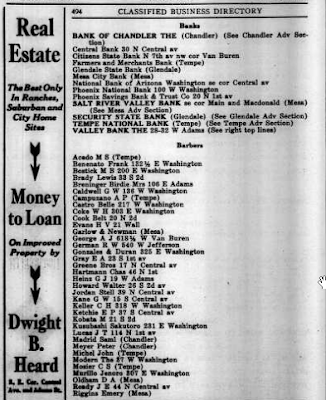 In the 1923 Directory, Antonio had moved again, and was now working in the barbershop of T.C. Thomas.

In the 1929/1930 City Directory for Tempe, Arizona, Antonio is still listed as a barber, living at 321 Mill Avenue (very close to Arizona State University and downtown Tempe).

In the 1930 US Census, Antonio is living in Tempe. The census taker misspelled his name as Antonio Campison. He was renting a place on 2nd Street in Tempe, Arizona (near 2nd & Mill Avenue), and was still working in a barber shop. He is shown as 60 years old and divorced. The census record also shows his immigration year as 1884.

I do not know if Antonio is related to Vicente Campuzano, but given his age, it is possible he was a younger brother of Vicente. I checked the 1940 US Census, and sure enough, Antonio Campuzano was listed, living at 306 E. 7th Street in Tempe. He is shown as 77 years old, divorced and unemployed.

My next step is to reach out to the Tempe History Museum and search for a possible obituary or other information on Antonio Campuzano that may help connect him to Vicente and others in the Campuzano family.

Update 24 August 2012 - After reviewing information provided by another Campuzano researcher, Antonio Campuzano and Vicente Campuzano were not brothers, but there is clearly some kind of family connection. We continue to work through the available documentation for the link between the two.
Posted by Patrick Jones at 12:30 PM