In the 1940 US Census entry for my Granny's Campuzano family, her grandmother Teresa Diaz de Portillo answered the questions from the census taker. Reflecting back as she answered the questions, Teresa stated that she had given birth to 10 children. I had previously only known about three: Manuela (my great-grandmother), Guadelupe Portillo, who was living with Plutarco Campuzano, Manuela and Teresa in the 1930 Census, and Isabel Portillo, who married Vicente Cruz and moved to Los Angeles. This post is on Isabel and Vicente.

Isabel Portillo
Isabel was born in Hermosillo, Sonora in 1903. From the Border Crossing records, Isabel arrived in the US at Nogales on 31 October 1922, about a month before her sister Manuela arrived on 28 November 1922. She had $12 with her, and arrived on foot, accompanied by her friend, Guadelupe M. de Villalobos. On the arrival manifest, the record states that she was going to join her aunt, Cleotilde Montano. This is the same person her sister Manuela and mother Teresa went to join in November 1922. 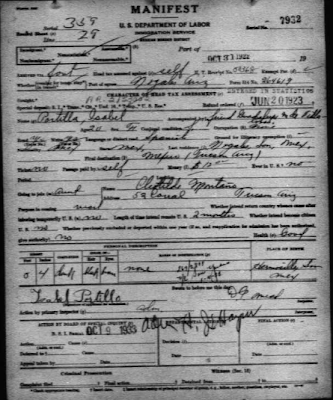 I checked the Tucson City Directory for 1924. Sure enough, Isabel was working at the Tucson Steam Laundry, and living with her sister Guadelupe and mother Teresa. Two new names also show up in this Directory - Ruby Portillo and Alfonso Portillo. 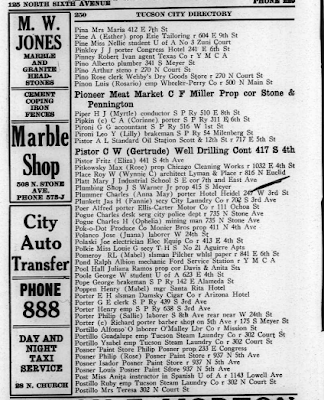 On 3 January 1933, the family crossed the border at San Ysidro (Tijuana), after visiting Isabel's uncle Francisco Mirazo in Hermosillo. Later that year, they visited Isabel's aunt Maria de Mirazo in Nogales. The family crossed the border back into the US on 9 October 1933. That crossing record included a photo of Isabel, and also shows additional crossing in 1934, 1935 and 1936: 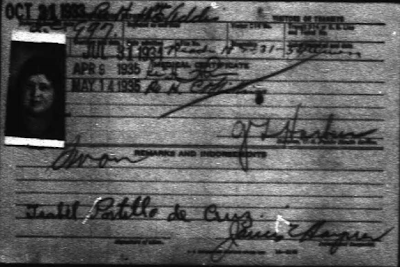 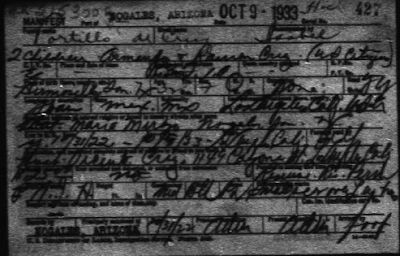 Vicente Alvarez Cruz
Vicente Cruz was born in Guaymas, Sonora on 22 November 1903. Vicente's naturalization document provides a great amount of detail about the family. Vicente arrived in the US for the first time on 10 April 1920, from Altar, Sonora. 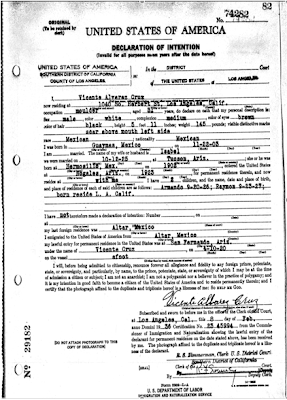 In the 1930 Census, the family was living in Los Angeles. Vicente was working in an iron foundry.

In the 1940 Census, the family was living at 1205 Prado Street, Los Angeles (East Los Angeles, near corner of East Olympic Boulevard, south of I-5). Isabel answered the questions from the census taker, as well as the supplemental questions. Her occupation was listed as "housework" and she did not have a Social Security number.

Vicente died in Montebello, Los Angeles County, California on 13 December 1988.
Posted by Patrick Jones at 10:44 AM