Later this month will mark 184 years since the Oyler family arrived in the United States. On 26 May 1828, my 3rd-great-grandfather Samuel Oyler landed at the Port of New York on the Schooner Fame. The ship had sailed from Rye, England.

According to the ship's passenger list, Samuel was 6 years old. He was accompanied by my 4th-great-grandparents, George Oyler (age 31), Sarah Oyler (age 34), and brothers George (12), William (10), Daniel (8), Alfred (4) and George's brother John Oyler with wife Elizabeth. 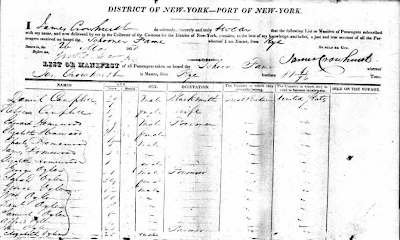 The Oylers were from Hawkhurst in Kent, England. We know from other records and George Oyler's obituary that the Fame departed Rye on 6 April 1828. George Oyler actually crossed back & forth between the US and England 5 times during his lifetime, as he maintained close ties with family back in England even after they moved to the US.

The Oyler family later settled in Hamilton and Butler Counties in Ohio.

Posted by Patrick Jones at 6:06 AM