Catching up from meetings in Los Angeles last week, here is Part 1 on the War of 1812 widow's pension application for my 4th-great-grandmother, Lucinda McIntosh Smith. She was born in Kentucky, sometime between 1798-1803, the daughter of John Og McIntosh and Sarah Bennett. Lucinda married Asa Putnam Smith in Mt. Carmel, Wabash County, Illinois, and they later settled in Crawford County, Indiana. Lucinda's widow's pension application was submitted in April 1879 from Leavenworth, Crawford County, Indiana and the claim was denied (although, as I have seen from other pension applications, that doesn't mean the soldier's service did not occur).

Asa Putnam Smith died on 11 February 1865 in Crawford County, Indiana. Lucinda states that Asa volunteered at Jersey City, New Jersey, that he served for 2 and half years and was honorably discharged in 1815. She states that at the time of enlistment, Asa was twenty-nine years old, a ship carpenter born in Nova Scotia, Canada, 5 foot 8 inches tall, light hair, sandy complexion and light gray eyes. 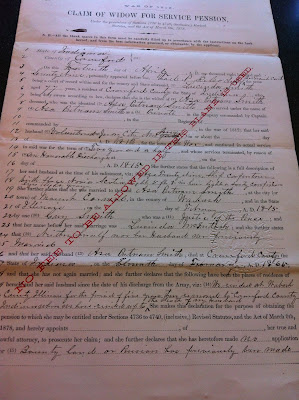 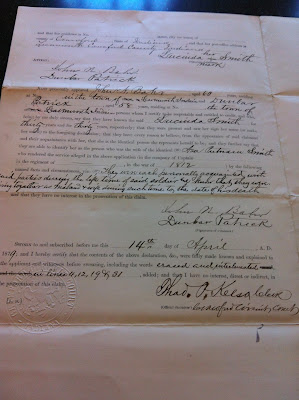 Lucinda's file also contained an affidavit from her brother, Daniel McIntosh, who witnessed her wedding to Asa Smith in Mt. Carmel, Illinois.

I'm going to pause here and pick up the story by including census and other records from Illinois and Indiana. If Lucinda's claim is accurate, Asa would have been born about 1783-1784. The 1850 US Census shows his place of birth to be Massachusetts, not Nova Scotia.