Posted by Patrick Jones at 7:59 AM No comments:

I'm back after 10 days of travel in Europe, adjusting to the time zone again. Most of the time I was in Barcelona, Spain, and I have quite a few photos to go through.

Blogging has been slow with all the time on the road. When the calendar flips to November I may have more time to catch up on some of the family history threads that were left behind.
Posted by Patrick Jones at 5:57 AM No comments:

While on our Sonoma trip we were able to visit the stunning Donum Estate for a private tasting and tour of the amazing sculptures on the grounds. This is a small sampling of the many photos we took during the tasting and tour. I have shared others on Instagram.
Several of the artists I've been lucky to see in other cities, such as Jaume Plensa, Yayoi Kusama, Ai Weiwei, Keith Haring, and Yue Minjun. Visiting the Donum Estate is like seeing a world-class outdoor museum. I am very glad we had the chance to see it while in Sonoma.
Posted by Patrick Jones at 8:40 AM No comments:

Last month, I took advantage of the sale on the National Geographic Geno 2.0 DNA Ancestry kit and sent off my sample for analysis. The results came in today. While I'm not complaining, it is interesting to see the differences between this kit and the latest update from AncestryDNA's expanded reference sample. I can also compare this new test result with the 2008 Y-DNA and mtDNA tests conducted through Ancestry.
The continent results from the Geno 2.0 test have me at 93% European, 4% Americas, 2% Asia. This isn't too far off the latest update from AncestryDNA, which had me at 94% European, 5% Native American, 1% Nigerian. My 2013 AncestryDNA results had 2% Asia, but this region was removed when the reference sample pool size was expanded for the 2018 update. The regional view really stands out though. 44% Southwestern Europe is a lot higher than I would have thought. My reference populations show up as Iberian (Spain) and French. The 8% Jewish Diaspora is a bit of a surprise, but taken with the Spanish descent it makes sense too. There are known Converso Jewish families who settled in Mexico. The Amado family is thought to be one example.

The deep ancestry results are also intriguing for their differences from the 2008 Y-DNA and mtDNA tests. In the 2008 test, my paternal line haplogroup came back as R1b. This new test has me at R-U152. In the 2008 test, my maternal line haplogroup was A. The new test shows A2D. A quick look into haplogroup research shows that U152 is a more detailed branch from what had been called R1b back in 2008, so this is not that different from the earlier test results. A2D makes complete sense. I know from prior research that my material line goes through Pueblo de Seris, Sonora. It is likely that someone on that line was of Native North American descent. For a deeper analysis into Native American haplogroups, see this article from 2017.

Does this change my view of my prior results? Not really. I think the AncestryDNA test and the Geno 2.0 test are slicing the data differently. Recent news and scientific articles have pointed this out. I find the ancient ancestry from Geno 2.0 intriguing but I also like how AncestryDNA allows you to connect with potential matches. I have been able to uncover some family connections through AncestryDNA, which has been really helpful. The Geno 2.0 test was offered at a relatively reasonable price, and that was a motivation for trying to see the difference from the Ancestry tests.

On this Indigenous Peoples Day, it is also cool to see a genetic link to my Native American ancestry.
Posted by Patrick Jones at 9:59 PM No comments:

Our son's 4th grade class is preparing for a visit to Jamestown this month. The visit calls to mind my previous posts on our early Virginia ancestors. Coincidentally, later today I am also doing an Internet video interview with a California student working on a National History Day project based on the life of Elizabeth Key Grinstead. This look back on my Virginia connections is timely. It also reminds me to watch the PBS-imported British series Jamestown, a fictional take on the arrival of some of the first women to Jamestown in 1619.
I am still looking for more resources and documents related to Elizabeth Key. Encyclopedia Virginia has published a transcript of part of the 1655/56 decision from the Virginia General Assembly, finding in favor of Elizabeth Key and granting her freedom from the estate of Colonel John Mottrom. I am interested in seeing the original case documents, if they still exist, or other references to Elizabeth and William Grinstead.
Posted by Patrick Jones at 2:36 PM No comments:

While researching the Campuzano family in Los Angeles, I stumbled onto some names I'm not sure where they fit, but I do believe they are connected in some way to the Campuzano family. A news clipping from May 1892 refers to "half-orphans" admitted to the Los Angeles Orphan Asylum. One child was Filomena Campasano.
Even earlier, two more Campasano children were admitted to the Los Angeles Orphan Asylum. This clipping is dated 10 April 1889:
Isidora Campasano shows up in other records, placing her birth date as 20 March 1881. She would have been 8 years old when admitted to the Orphan Asylum. In the 1900 City Directory, Isidora was working as a cigarmaker in Downtown LA, not far from Boyle Heights. She would have been 19 then.
Even earlier, she appears in the 1896 City Directory as Ysidora Camposana, working as a cigarmaker for G. Tognetti and living at 665 Upper Main. She would have been 15 then.

On 13 October 1903, Isidora married Italian immigrant Frederico Sulpizio. They had a son, Dominic Sulpizio, on 9 April 1906. She registered to vote in 1916, and listed her employment as a laundress.

Isidora divorced from Frederico and married another immigrant, Anton Surina, on 18 July 1918. In the 1920 US Census, she was working in a cannery in Downtown LA, living with son Dominic. She may have been separated from Anton already by 1920, and they later divorced. Anton remarried in 1926. It is unclear what happened to Isidora after 1920.

Posted by Patrick Jones at 8:56 AM No comments:

After following the fate of Frank Campuzano's first wife, Rosario Hinojosa, I'm turning back to pick up the rest of his story. Frank and Rosario separated sometime before 1900, as in the 1900 US Census Frank had begun a new family with Joaquina Contreras. Their son Frank C. Campuzano was born on 4 April 1900. Frank Sr. and Joaquina were married on 4 October 1901 in Los Angeles.
Frank and family appear in the 1910 US Census. He and Joaquina had three children:
- Frank C. Campuzano
- Arnold Campuzano
- Della Campuzano
They also appear in the 1920 US Census. Frank operated a cigar store.

This is as far as I'm going to track Frank and family. If a descendant of his stumbles onto this page, please reach out, I am interested to compare DNA results.
Posted by Patrick Jones at 2:36 PM No comments:

Yesterday's post looked into the life of Rosario Hinojosa, first wife of Frank Campuzano, and her tragic death in Los Angeles in 1903. Rosario's half-sister Refugio Rodriguez had challenged the disposition of Rosario's estate, which included some valuable land holdings in Boyle Heights. In 1905, the lower court found in favor of Rosario's husband, Vicente Cigaran. Refugio appealed the case. The California Supreme Court overturned the decision in 1907. 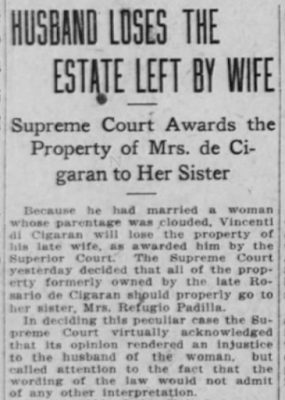 I looked up the decision on Lexis-Nexis, and thankfully there is more information to view. The case is cited as In re estate of De Cigaran, 150 Cal. 682 (21 Mar 1907). The case turned on the issue of whether the property owned by Rosario was hers before her marriage to Vicente Cigaran. Because the land owned by Rosario was brought into the marriage and was hers, not community property owned by both Rosario and Vicente, the property was subject to Section 1388 of the Civil Code. This meant Refugio inherited the property, as the surviving relative of an illegitimate person. The California Supreme Court cited to the De Cigaran decision as recently as 2001.

The battle over the case continued into 1908, as Vicente sought a retrial after the case returned to the lower court. The value of the estate continued to rise during the legal battle, growing from $12,000 to over $50,000.

Posted by Patrick Jones at 9:58 AM No comments:

Before departing for meetings in Los Angeles, I was following the news articles and documents on the life of Francisco "Frank" Armenta Campuzano. I am now going shift attention to his first wife, Rosario Hinojosa. She was born around July 1859 near Sahuaripa, Sonora. She left Sonora and sailed for San Francisco to escape raiding by Apaches in Mexico. Rosario then moved to Los Angeles about 1882.
Rosario married Frank Campuzano in 1884. Through her own efforts, overseeing rooms for rent, she managed to save enough money to purchase property in Los Angeles. It is unclear if Rosario and Frank had children. A divorce was granted by the court in LA County on 6 June 1900, but they had likely been separated for longer. Rosario and Frank were soon in other relationships. She married Vicente Cigaran a week after the divorce was finalized, in Tucson, Arizona, while Frank married Joaquina Contreras on 4 October 1901. I will have more on Frank and Joaquina in a later post.
Rosario was living next door to Vicente in the 1900 US Census. Her occupation was "capitalist."
Rosario's story took a tragic turn. In July 1903, she was driving a buggy in Los Angeles and was struck by a train. 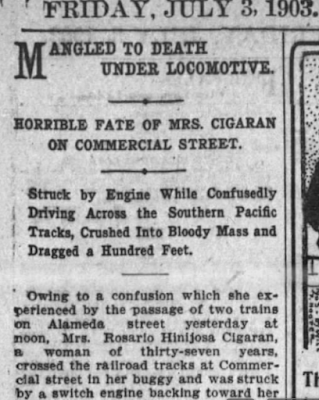 News articles about Rosario after her death provide some insight into her life. She had a half-sister, Refugio Rodriguez de Padilla, who filed a claim to part of Rosario's estate, over the rights of her 2nd-husband Vicente. Rosario died intestate and there was some dispute over whether Rosario had an earlier husband still alive in Mexico.
Another article in the LA Times provides more background, although it does get some of the facts wrong about Rosario's age, she was 40 when she married Vicente Cigaran, not 59: 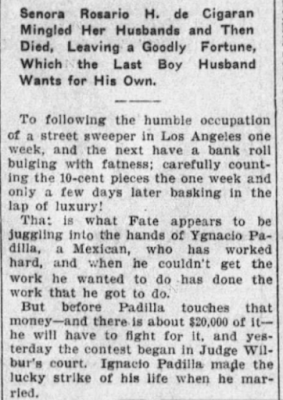 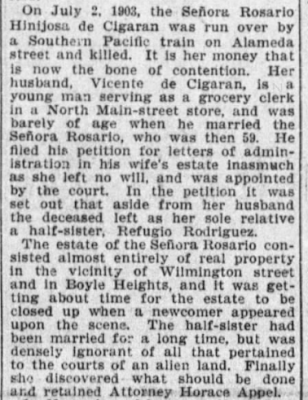 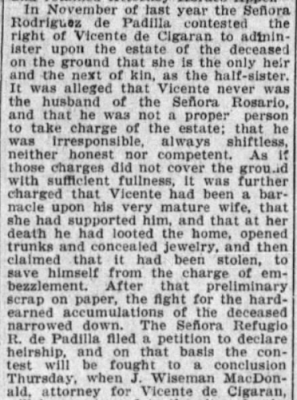 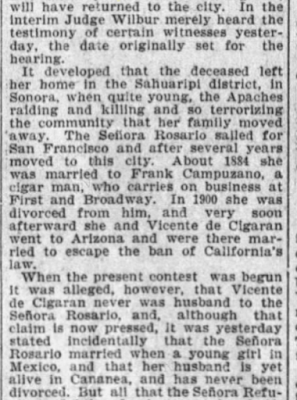 The half-sister lost the case at the lower level. 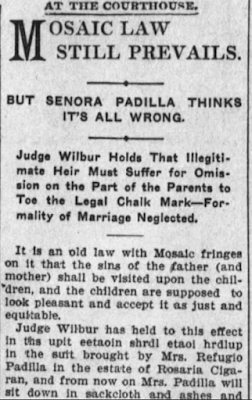 Posted by Patrick Jones at 9:59 AM No comments:

Last week I was in LA for meetings, followed by a wonderful long weekend in Sonoma County. I have a whole set of new photos and things to cover on the blog. I will be sharing more on this shortly, as well as picking up the story on Frank Campuzano. The weekend provided an opportunity to see a new part of the state and deepen my appreciation for California.
Posted by Patrick Jones at 10:59 AM No comments: