A first collection of photos from our day at Chichen Itza last week during Spring Break. We entered the park through the private entrance at Hacienda Chichen, putting us next to Akab Dzib and the "Iglesia". This was a different entrance than how we entered the park in our 2005 visit, which put us in the House of a Thousand Columns to start.
In our 2005 visit to the park, we were able to climb through the ruins. Given the large number of visitors that the park receives, it is probably for the best that people are no longer allowed to climb the ruins. The only climbers now are lizards. There are a lot, I do not remember seeing so many lizards in the park in 2005 but now they're everywhere.

After walking by the Monjas and Iglesia formations, one next passes the iconic Caracol or observatory. We had a great day for walking around, sunny and not too hot.
I did not take pictures of the many Mayan artisans selling their wares next to the ruins and throughout the park. Perhaps I should have. Actually, that isn't true. I took one picture showing how some of the stalls have adopted the "Predator" creature and incorporated this into Mayan iconography (the Predator was a common sight on many of the stands). I am not sure who goes to Chichen Itza thinking to themselves "what I really need to bring home from Mexico is a statue of the Predator", but there you go, an example of globalization of culture in the Mayaland.
I will have more photos in the next set.

Posted by Patrick Jones at 5:58 AM No comments:

Another Connection in the Orleans Fire Regiment

Prior to Spring Break, I was exploring the connections to the Paderas and Tudury families in New Orleans. There was another connection I did not have time to post before the trip. Back in February 2015, I wrote about my wife's 3rd-great-grandfather, Joseph Francois Halter. Joseph served in Company F of the Orleans Fire Regiment, Confederate Army during the Civil War. Also serving in the same company was Theodore Paderas, older brother of Louisa Paderas (first wife of Joseph Halter's uncle Joseph) and Dorothea Paderas Tudury.
Theodore appears in the 1860, 1870, 1880, 1900, 1910 and 1920 US Census entries. I also found a record for him in the Louisiana Wills and Probate Records on Ancestry indicating that he died on 1 January 1922 in New Orleans. Theodore immigrated to the US between 1840 and 1843. It looks like he was naturalized on 15 June 1867.

He operated a hardware and stove store at 294 Old Levee Street, New Orleans, and appears in several newspaper entries over the years.

Posted by Patrick Jones at 4:45 PM No comments:

A week ago we started our Spring Break at the wonderful Hacienda Chichen resort, located on the grounds of Chichen Itza. Hacienda Chichen, built by Spaniards in 1528, was the home of the Carnegie Institution's Maya Research Expedition in the 1920s. We stayed in Sylvanus Morley's cottage during our few days there.

My wife and I stayed at Hacienda Chichen in 2005, and this visit really brought back the memories. The resort now employs 99% local Maya workers and is operated by the 4th-generation of the family that acquired the Hacienda in the 1920s. The resort focuses on green living practices and sustainable responsible tourism. Their award winning restaurant features locally grown or sourced fruits, herbs and vegetables. We had a wonderful stay and would recommend it to anyone going to Chichen Itza.
I think the resort has really improved since our last visit 11 years ago. I don't remember the pool from 2005, and the pool this year was very nice. The kids loved it and I liked it too. The pool was a nice break after spending the day at Chichen Itza. We covered over 7 miles on one day (Sophia and I did an extra 4 miles with an afternoon walk back to the ruins).

A bonus for staying at Hacienda Chichen is the entrance to Chichen Itza allows early access to the grounds before the tour buses arrive, allowing one to avoid the crowds and get an advance look at the ruins. I will have photos of our visit to the ruins in the next post.
Posted by Patrick Jones at 10:24 AM No comments:

We're back from Spring Break in the Yucatan and Riviera Maya. Yesterday was a long travel day with a 3:30am start and extended layover between flights in Atlanta, but we're glad to be back home. Everyone did great and we learned some travel lessons along the way - get the kids Global Entry, it is worth it for everyone in the travel party. We had a wonderful week and made many vacation memories. Below is a small sampling of the many photos from the trip. I will have much more on the trip in subsequent posts.

Posted by Patrick Jones at 7:25 AM No comments:

In honor of Spring Break, I have a mix of historic etchings and photos via the New York Public Library Digital Collection and my own photos from our January 2005 visit at Chichen Itza (and one from my Frequent Traveling sister from her own trip to Mexico last month).

Posted by Patrick Jones at 8:11 AM No comments:

Second set of photos from last week's stopover in Madrid on my way back from Marrakech:

Posted by Patrick Jones at 2:07 PM No comments:

While searching for news articles on the Tudury family of New Orleans, I stumbled onto an announcement in the New Orleans Herald dated 17 December 1914 for the opening of the J. P. Simmons Piano Company. The company was formed out of the Junius Hart Piano House, and opened its doors at 124-126 Carondelet Street, just a few blocks down the street from where my great-grandfather lived from 1906-1908. This was in the Central Business District, an area that played a prominent role in the early Jazz days of New Orleans. 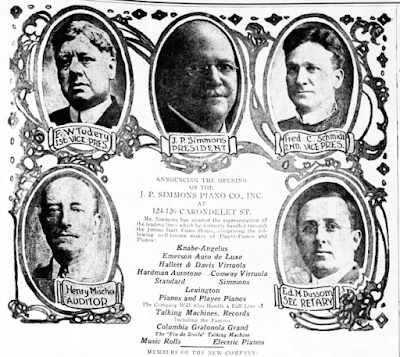 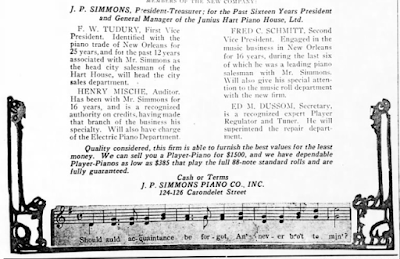 Frederick W. Tudury became First Vice President of the J. P. Simmons Piano Company, and worked many years as a piano salesman in New Orleans.
Posted by Patrick Jones at 8:37 AM No comments:

A search of news articles on the family at Newspapers.com revealed the family to be involved in the New Orleans social scene. Joseph and Ralph were well known in their younger days as musicians.
This makes me wonder if my great-grandfather Harry Edward O'Brien would have been familiar with music written by the Tudurys, as he was in New Orleans beginning in 1906.
Ralph Tudury graduated with a degree in medicine and pharmacy from Tulane University in 1893. He married Emma Bray in October 1893, and the wedding ceremony was covered in the Times-Picayune as a grand event.

Martina "Tiny" Antoinette Tudury married John H. Carrerras in September 1889. She regularly appeared in the New Orleans newspapers, and later took on the administration of her mother's estate after her death in 1900.

Fred W. Tudury worked in the New Orleans music and piano business. I will have a separate post on him shortly.

Posted by Patrick Jones at 8:04 AM No comments: