Over the Christmas break, I wrote about my wife's great-grandfather, Calvin Luther Halter. In the 1930 US Census, he and wife Helen Umbach Halter were living with Helen's parents, Fred C. Umbach and Emma Koehler Umbach in Evansville, Indiana. According to Fred's World War II draft registration card, he was born on 7 November 1885 in Posey County, Indiana. He was a master plumber who operated his own business.
Fred and Emma appear in the 1942 City Directory in Evansville (along with other Umbachs):

Looking at his World War I draft card, Fred's full name was written as Fredrick Charles Umbach. The card also shows he was tall, with brown eyes and light colored hair. 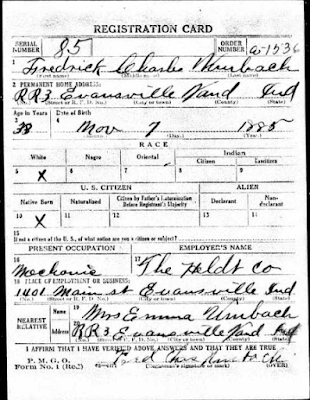 Fred and Emma were married on 31 March 1909 in Evansville, Vanderburgh County, Indiana. In the 1910 US Census, they appear with daughter Helen in Ward 7, Evansville. Fred was working in a leather store. Interestingly, in the 1920 US Census, Fred and Emma were living next door to Emma's parents. Her father's occupation was listed as tanner, so perhaps Fred got his start in Emma's father's store.
Fred and Emma had at least the following children:
- Helen Elva Umbach
- Elmer Frederick Umbach
- Clarence William Umbach
- Ruth Eleanor Umbach

Fred passed away on 14 September 1962 in Gary, Lake County, Indiana.

Posted by Patrick Jones at 8:11 PM