Grandpa Koehler and his Emergency Passport

In yesterday's post on Mary Elizabeth Schwarzlose Koehler, I quoted a passage from the book Genealogy of the John William and Maria Elizabeth Schwarzlose Family, 1853-1989 discussing Mary Elizabeth, her husband, William Henry Koehler, and their life in Evansville, Indiana. William was born Wilhelm Koehler on 2 April 1856 in Eppingen, a small town southeast of Heidelberg in Baden-Wurtemberg, Germany.

According to the book, "Before World War I, Grandpa went back to Germany to visit his relatives. While he was gone, the war started, and he was not heard from and was gone so long that everyone thought he had been killed in the war. One day he walked in at home and no one recognized him with a beard and a mustache that he hadn't had when he left." This story is confirmed in the Emergency US Passport Applications database on Ancestry, which shows William Koehler was issued a passport at the US Consulate in Mannheim, Germany on 19 August 1914, one month after the start of World War I. This is really a fantastic document, as captures William's birth date and town, his first arrival in the US, the date of his naturalization as a US citizen, the dates of his return to Germany and his signature. 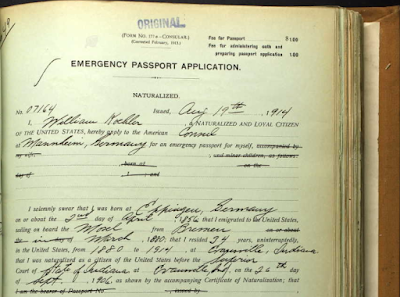 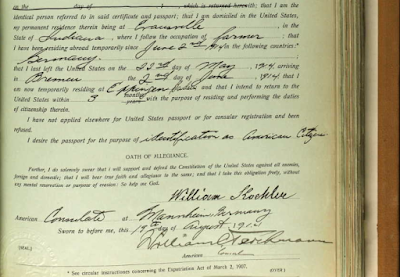 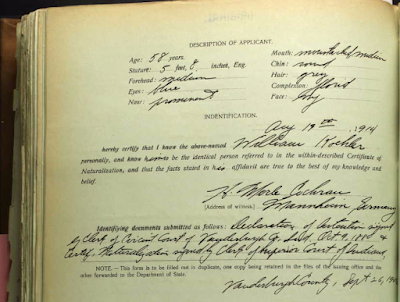 William stated that he first arrived in the US aboard the ship Mosel, departing from Bremen in March 1880. While I did not find him in the passenger records for 1880, I did find a 20 year old Wilhelm Kohler who arrived in New York on the ship Mosel from Bremen on 28 April 1877. According to the Bremen Archives, the Mosel made a regular run between Bremen and New York.

The document indicates that William left the US on 22 May 1914, arriving in Bremen on 2 June 1914. The war began in July 1914. It is not clear when William returned, but his passport application shows he only intended to stay for 3 months.

Mannheim is a large city neighboring Heidelberg, so this would have been relatively close to his family home in Eppingen.
There's more on William, and on his German roots, which I will have in another post.
Posted by Patrick Jones at 10:32 AM