Yesterday the Tennessee Secretary of State's Office announced that early Tennessee tax records, covering the period from 1783-1895, are available on Ancestry.com (the direct link can be accessed at http://search.ancestry.com/iexec/?htx=List&dbid=2883). This has already yielded some useful information on my Jones and Thornhill ancestors in Jefferson County, Tennessee. The Secretary of State's announcement notes that the database contains 262,784 records and 7,720 images.

My first find in the set was my 4th-great-grandfather, Robert Jones. He was living in District 9, Jefferson County, Tennessee in 1836.

In District 1, on the same page as Hugh Henry, is William Jones. On the next page, is a Stephen Jones. I've noted before how William Jones was a son of my 5th-great-grandfather Thomas Jones.

The summary page for Jefferson County in 1836 is pretty interesting too: 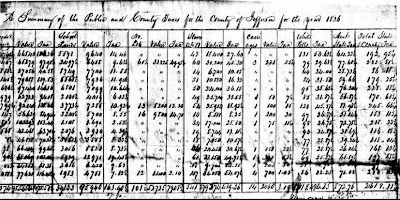 There are many more records in this database that appear to be useful for my research. More finds to follow.
Posted by Patrick Jones at 5:51 AM