A New Find in Tempe

Every once in while in family history research a new thread of information comes along that opens up a greater appreciation for the richness of the time in which an ancestor lived. Yesterday I received some information that casts new light on my 2nd-great-grandfather's time in Tempe, Arizona.

The curator at the Tempe History Museum replied to my email inquiry from Wednesday asking about Antonio and Vicente Campuzano. He said that Vicente Campuzano appears in the 2 July 1915 edition of the Tempe News as Sergeant at Arms, Liga Protectora Latina, Lodge No. 1 in Tempe in 1915. Now this is really interesting. La Liga Protectora Latina was founded in 1915 as a mutual aid society, and was an early organization supporting civil rights protection and labor improvements for Mexican Americans in Arizona.

I have sent a follow-up note to the Museum, and to several others in Arizona for more information about La Liga Protectora. I already had a strong sense of pride in my Mexican-American heritage, but knowing that a direct ancestor played an early role in supporting immigrant rights is something I am eager to learn more about.

The following article appeared in the 18 May 1915 issue of the Prescott Journal-Miner: 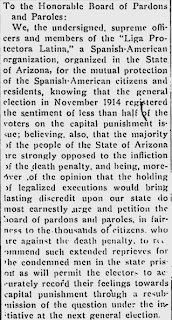 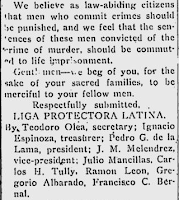 The petitions from La Liga Protectora must have had an impact, as on 29 July 1915, the five men were granted a reprieve from hanging when their case was referred to the State Supreme Court by Judge McAllister of the Superior Court in Phoenix.

The following article appeared in the 2 August 1915 edition of the Arizona Republican: 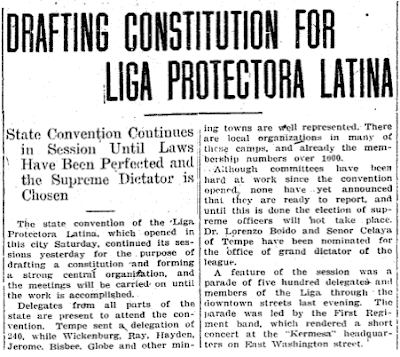 Vicente Campuzano was likely one of the attendees at this drafting convention. I will have a follow-up post on La Liga Protectora soon.