On 13 February, I wrote about the migration of the Read family from Culpeper, Virginia to Barren County, Kentucky. In 1841 and 1844, William Freeman Read appears on two deeds of trust in Culpeper County, Virginia records. These are two of the last records mentioning William F. Read in Culpeper. The second deed ties William to Rice Carter Ballard, brother of William's wife Emily Ann Heslopp Ballard. Rice Ballard was a slave trader and later plantation owner who worked with the Franklin and Armfield slave trading firm in Alexandria, Virginia in the late 1820s and early 1830s.

In both deeds, a slave woman named Letty is listed as additional collateral. 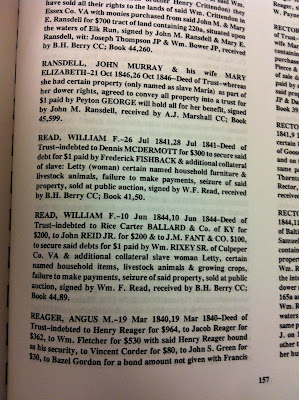