The US Department of the Interior maintains a very useful website called the Bureau of Land Management General Land Office records automation website. The GLO records contain more than five million Federal land title records issued from 1820 to the present, as well as survey plats and field notes dating to 1810.

One can search by state and county, and also by name and land description. This site has been incredibly helpful in my research, and it is a wonderful compliment to records found through other sources. The GLO records are also free.

This search returned three entries in Oklahoma County, Oklahoma with the last name Lambert: Henry D L Lambert, Robert A Lambert, and William J Lambert. I'll file the other two Lamberts away for later, as they may be related. By clicking the result for Henry, it shows the patent details. It was issued in the Guthrie, Oklahoma land office on 28 November 1900. I can open and download pdf image of the actual land patent (Blogger doesn't permit me to upload pdfs, so I had to convert the pdf to a jpg and cut it in half, see below): 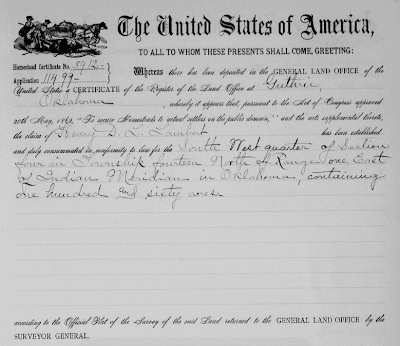 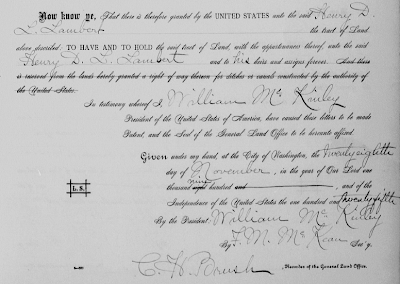 This shows that Henry's land patent was 160 acres. Another interesting detail is the description of the land and its distance from "Indian Meridian in Oklahoma." Read more about the Indian Meridian on the Oklahoma Historical Society's Chronicles of Oklahoma, Volume 5, Number 3 from September 1927 by Alvin Rucker (see http://digital.library.okstate.edu/Chronicles/v005/v005p328.html).

Back to the Land Records site, if you click on the Related Documents tab, you can also see what other documents match the land description for the particular record.

I went back and ran a more general search for the whole state of Oklahoma with last name Lambert. There were three pages of hits, but in doing so, I confirmed there were no other land patents for Henry Donham Lee Lambert. I did find several for William L Lambert, son of Henry and younger brother of my 2nd-great-grandmother, Matilda Jane Lambert O'Brien.

I also looked at surrounding states to see if Henry had obtained other land patents as he and the family made their way west from Illinois. This did not turn up additional records for Henry, but I did find three land patents for Henry's father, Clayton Lambert, in Vigo County, Indiana on 1 October 1835. I'll have more on that later.