Looking into the Riggs case

In Monday's post, I started revisiting the case of State of Tennessee v Pleasant Riggs. Riggs was a Private in the 9th Tennessee Cavalry from 1864-1865. He had previously served in the Confederate Army from 1861-1683. Riggs was with the Union soldiers during the murder of Captain John A. Thornhill on 24 June 1865. A civil suit was brought against Riggs and other soldiers, this wound its way up to the Supreme Court before being sent back to the circuit court in 1866, finding judgment in favor of Riggs that the circuit court had ruled against him in error. This case file covers the retrial in Grainger County, Tennessee from November 1866 to 1869. The new trial began on 24 December 1866. 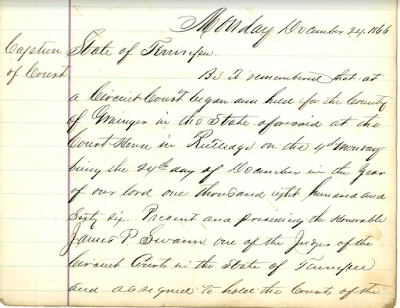 A Grand Jury was formed, and Riggs posted a $3000 bond on 28 December 1866. The next proceedings in the case were on 29 April 1867. The Tennessee Attorney General represented the State, charging Riggs with murder. The State also claimed Riggs was in default on the $3000 bond. Riggs filed an appearance on 28 August 1868. In December 1868, Riggs' counsel requested a continuance to the next term of the court (April 1869). In April 1869, Riggs' counsel again requested a continuance to the next term, August 1869. On 25 August 1869, Riggs entered a plea of not guilty. The jury found Riggs guilty of second degree murder, sentencing him to 10 years hard labor in jail.

Riggs took his case back to the Supreme Court of Tennessee. On 1 September 1869, Riggs' counsel provided a series of exhibits in support of his client. First, they claimed two of the jurors were ineligible to have been empaneled. Second, the jury should have been advised that Riggs was a soldier in the US Army and was ordered by a superior officer to be at the place where the murder occurred, that he was lawfully there and no act or deed of the others could be given in evidence of the defendant Riggs.

The Supreme Court sided with Riggs.

Update
Riggs married Joanna Giffort or Gifford in Grainger County, Tennessee on 15 September 1868. He had been previously married to Fanny A. M. Ellis on 28 October 1860 in Jefferson County. Fanny and Riggs were separated during the Civil War, and the depositions in the Riggs case mention that he was living apart from his wife.

While this marked the end of the Supreme Court case, this recap only covers the first 37 pages of the file. There are still 100 more pages to cover. Fortunately the case file also included the witness testimony from the circuit court, and this is where it becomes very interesting for my family history research. I will continue this in the next post.
Posted by Patrick Jones at 2:46 PM