This headstone is for my 2nd-great-grandfather Thomas Robert Jones (yes, there were a lot of Thomases on my Jones side), son of Joseph Thomas Jones. His wife, Sarah Ellen Armstrong, was buried along side him in Saint James Lutheran Cemetery in Darlington, Montgomery County, Indiana. 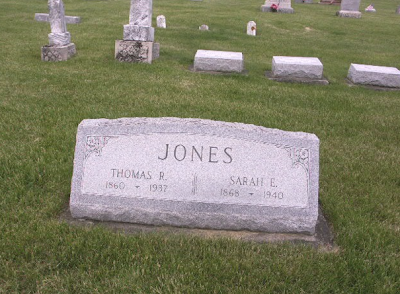 Darlington is located a few miles north east of Crawfordsville, Indiana, where I went to Wabash College. I did not know until years after college that I had Jones family who owned and lived on the land in Montgomery County. I wish I had known that (or paid closer attention) back then, I certainly had enough downtime to have visited and researched the Joneses. 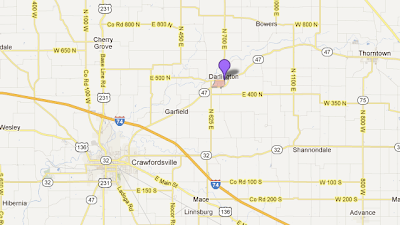 Thomas Robert Jones was born in Jefferson County, Tennessee on 23 March 1860. He was third child of Joseph Thomas Jones and Mary Katherine Green.

Sarah Ellen Armstrong was born on 7 December 1868 in Jefferson Township, Boone County, Indiana. She was the fourth child of David Armstrong and Easter Vail. I will have more on Sarah Ellen in a future post.

Posted by Patrick Jones at 4:30 AM