Later today the NY Giants and the New England Patriots take the field in Indianapolis for Super Bowl XLVI. The game has already been a huge success for Indy with all of the pre-game events and activities Downtown. While we can't be there in person with family & friends, we'll be watching from home in VA with my sister and our kiddos.

My Mom sent me this photo from the fireworks on Thursday: 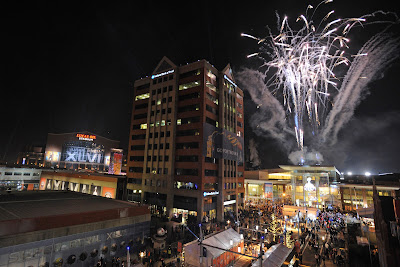 The field will look a bit different today, but here is a photo of the stadium from December 2009 (the infamous game where Peyton was pulled in the second half and the Colts lost to the Jets, ending their perfect season). The fans attending today should have a great time. 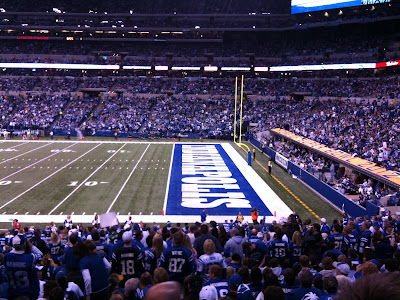 My Granny, Lydia Campuzano Reid, would have enjoyed having the big game was in Indianapolis. She passed in May 2010. During her life she loved NFL football, attended games and met many players. She often won fantasy football leagues, including one hosted by the Indianapolis Star. I'll be thinking of her today as well.
Posted by Patrick Jones at 9:35 AM