Here's another post on Culpeper ancestors on my Mom's Read side. The father of William Freeman Read was Samuel Read (my 5th-great-grandfather). He was born in Culpeper, Virginia in 1763, and was the son of John Read and Elizabeth Perkins. John Read was a wealthy landowner in Culpeper County. I will have more on John (and his own father John) in a future post.

Revolutionary War Veteran?
I found a Samuel Read on Fold3.com under Captain John Roberts Company, Virginia dated 1 July 1779. He would have been 16 years old.  I am not certain at this time if this person is the same as my 5th-great-grandfather.

Culpeper County Tax & Land Records
I found several documents referencing Samuel Read in the Culpeper County Library. The Read family lived in the northern half of Culpeper County. There are many names here connecting the Reads to other land owners in Culpeper, such as Fitzhugh, Fishback, Freeman, Primm, Wigginton, Basye, Yancy and others.

Samuel Read purchased a tract of land in Culpeper County in 1791 in a three-way transaction from Thomas & Ann Fitzhugh and James Primm:


Pages 246-250. (On margin: Fitzhugh & Wife to Read)
This indenture made the thirteenth day of December in the year one thousand seven hundred and ninety one between Thomas Fitzhugh of Stafford County, Gent., & Ann, his wife of one part, James Primm of said County of the second part & Samuel Read of Culpeper County of the third part; Witnesseth that Thomas Fitzhugh and Anne his Wife & James Primm in consideration of the sum of One hundred & forty six pounds five shillings to them paid by Samuel Read do by these presents bargain & sell unto Samuel Read his heirs a certain tract of land lying in County of Culpeper, being part of a large tract lately held by Thomas Fitzhugh & granted by patent to which parcel of land by a Survey thereof made by John Wigginton is bounded. Beginning at a red Oak & Spanish Oak corner to a Lott of land sold by Thomas Fitzhugh to Gerard Freeman in the line of said patent, thence South fifty five West ten poles to a
The Commonwealth of Virginia to Thomas Mountjoy, Henry Vowles & Alexr. Morson, Gentlemen, Justices of Stafford County, Greeting. Whereas (the Commission for the privy examination of Anne, the Wife of Thomas Fitzhugh); Witness John Jameson, Clerk of our said Court at the Courthouse the tenth day of May 1792 and in the 16th year of the Commonwealth
John Jameson
Stafford County, Sct. Pursuant to the within Dedimus to us directed, we have examined Mrs. Anne Fitzhugh private & apart from her Husband, she relinquishes her right of Dower to said tract of land & is willing it should be committed to Record. Given under our hands & seals this 24th day of July 1792

Received this 7th day of September 1793 from the within names Charles Huffman, the sum of Fifty pounds current money of Virginia being the consideration within mentioned as witness my hand & seal
Teste James Jett                                    Samuel Read
The Commonwealth of Virginia to William McClanahan, John Wigginton & James Jett, Gentlemen, Greeting, Whereas (the Commission for the privy examination of Julaner, the wife of Samuel Read); Witness John Jameson Clerk of our said Court at the Courthouse the 7th day of September 1793, and in the 18th year of the Commonwealth
John Jameson
In Obedience to the within to us directed, we personally examined the within named Julaner separate and apart from her husband concerning her acknowledgement by the said Samuel & together with the Commission thereto annexed & Certificate thereon endorsed, are ordered to be recorded
Teste John Jameson, Cl Cur
Samuel's Estate
Samuel died sometime before 8 February 1806 in Culpeper, Virginia. According to Culpeper County Will Book E: 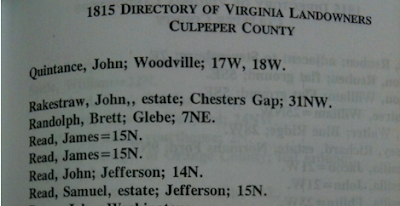 Posted by Patrick Jones at 6:00 AM