My Jones line descends from the sixth child of Robert Thomas Jones Sr. and Elizabeth Thornhill, Joseph Thomas Jones. He was born in Jefferson County on 16 April 1837. Joseph was part of a group of siblings who moved from the Jefferson and Hamblen County areas of Tennessee to Boone & Montgomery County, Indiana about 1879. Joseph's sister Caroline Jones and 2nd husband Anderson Walker, may have preceded Joseph in Indiana by a few years, paving the way for the second group of siblings to migrate there.

Joseph married Mary Catherine Green on 25 February 1856 in Jefferson County. Mary was the daughter of Thomas Green and Sarah Sally Hickey, and Mary was born in Jefferson County in 1839. A copy of their marriage record is below via the Tennessee State Marriages, 1780-2002 database.

By 1870, the family was located in Witts Foundry, Jefferson County. His occupation is listed as farmer, with real estate valued at $1,000 and personal property at $1,202.

In the 1880 US Census, the family appears in Sugar Creek Township, Boone County, Indiana. Siblings Martin Jones and Sarah Melissa Jones are listed as neighbors with their families. Older sister Margaret Caroline Jones was in nearby Montgomery County in the same census.

I'll have more on Joseph's siblings and their journeys to Boone County & beyond. 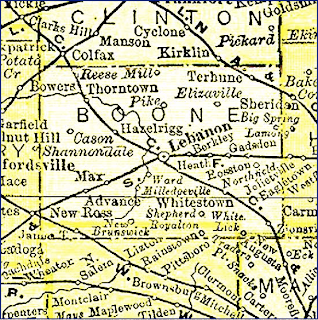 Update 6 February 2012 - I am currently searching for confirmation via the Boone County, Indiana Library on the locations of their death. I previously posted a headstone photo from Oak Hill Cemetery in Boone County, but after calling the Cemetery, I confirm this is not my third-greatgrandparents. So I'm still looking.

Update 1 November 2012 - Based on his Civil War pension file from the National Archives in Washington, DC, I'll be replacing this entry with a thorough update to include new information. Joseph lived a long and interesting life.
Posted by Patrick Jones at 6:01 AM