"on the Piedmont stage route from Washington to Milledgeville, Georgia. The town is built on one street and contains 43 dwelling houses, 1 Baptist house of worship, 1 Female association for the purpose of educating young men for the ministry, 1 elementary school with 50 scholars; also 3 mercantile stores, 3 taverns, 1 tanyard, 1 hat manufactory, 3 boot and shoe factories, 1 wagon maker, carriage maker, and 3 house carpenters. Population 300, of whom two are physicians." 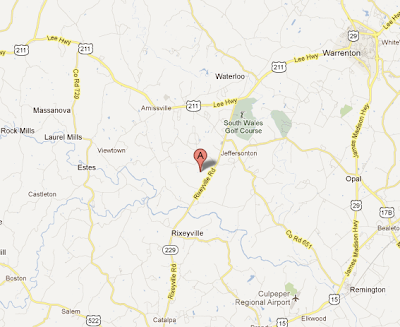 According to Early Churches of Culpeper County, Virginia, by A.D. Thomas Jr., the Read family home in Jeffersonton hosted the Marquis de Lafayette and former President James Monroe in 1825.  The book includes a description from Captain Philip Slaughter, who accompanied General Lafayette from Culpeper to Jeffersonton:
At 6 o’clock A.M. Tuesday, August 23d, I had the carriage at the door, and I directed the cavalry to mount, and proceeding, we reached Jeffersonton (fifteen miles), on the Fauquier road, at 9 o’clock. The citizens of Jeffersonton, and of its vicinity, to the number of several hundred, being arranged in two ranks, General La Fayette and suite, attended by a handsome escort of cavalry, passes through them, to the portico of Mr. R. Bayse’s tavern, where they were received by the committee of arrangements, and a very appropriate address was delivered to the General by Colonel Samuel A. Storrow, to which the former responded, to the heart-felt gratification of the hearers. They next repaired to Mr. John Reed’s house, where a private room had been prepared for the accommodation; and after having rested a short time, they were conducted by the committee to a breakfast, which had been prepared for the occasion under a spacious and commodious arbor at the west end of Mr. Bayse’s tavern. After breakfast, they were again conducted to Mr. Reed’s, in whose portico, a large collection of ladies being assembled, the General and ex-President Monroe were introduced to them all individually, Colonel Daniel Ward announcing their names as they were presented. This being gone through, and the guests having taken a short respite, the gentlemen were arranged in a semi-circle, extending from Mr. Reed’s portico to Mr. Bayse’s tavern, and the General, passing along the line, gave each one a cordial and affectionate shake by the hand.
The General then repaired to the private room, where they waited for the preparation of the escort, which being ready, the committee conducted them to their carriages. The parting ceremony between the committee and their guests being now most affectionately performed, and a considerable number of citizens on horseback attaching themselves to the rear, they all together moved off, while the remaining citizens gazed, with mingled emotions of sorrow and delight, on the carriage which bore away the friend of their liberty and the sustainer of their rights. At the Fauquier line, General Lafayette and suite were received by the marshalls, and an elegant escort of cavalry, sent from Warrenton for the purpose. 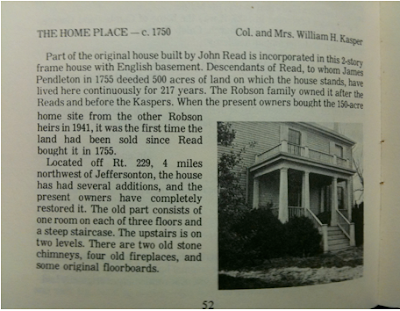 My 7th-great-grandfather was John Read Sr. (1699-1765). The earliest land record I have found to date for John Read Sr. is from 7 April 1730 in Spotsylvania County, Virginia:

John Read Sr. died on 19 September 1765 in Culpeper, Virginia. The Will of John Read was dated 17 August 1765:
Pages 402-05. Will of John Read, dated 17 Aug. 1765.
John Read of the County of Culpeper being sick and weak of body. I lend unto beloved wife Winefred during her natural life the following slaves to wit Tom and Jeny and after her decease from unto my beloved son Theophilus and Jenny unto my son John Read.
Unto my daughter Mary (now decd.) who was the wife of Joseph Norman one shilling current money.
Unto my beloved son John Read one Negro boy Peter in trust upon this special proviso that after the said slave arrives to the age of sixteen years my said son John shall allow and pay unto my daughter Winifred the wife of John Shakelford in nessary [?] clothing and apperel the sum of six pounds current money to be laid out the best advantage yearly and every year during both the lives of the said Winefred and Negro Peter aforesaid. Nevertheless if the said Winefred should out live her said husband then I give the said Negro Peter to her but if she should die before her husband I give the said Negro Peter to my said son John Read.
Unto my daughter Elizabeth the wife of Stephen Jett one gold ring.
Unto my beloved son John Read one Negro boy Cato. Also to my said John by [sic] great black walnut chest.
Unto my beloved son Hankenson the land whereon he now lives with all the stocks, tools thereon. Also the following slaves to wit Great Cato and Little Moll.
Unto my beloved son Theophilus Read one Negro man Adam, one Negro woman Hanah and one child Nann.
Unto the children of my daughter Ann (the wife of Hugh Freeman) to be equally divided between them at the death of my said daughter Ann one Negro girl Lilley, one feather bed and furniture and one cow and calf, the whole being now in the possession of said Hugh Freeman.
Unto my granddaughter Mary Norman one feather bed and furniture and cow and calf.
Unto my sons John and Hankerson my cart wheals and whip saw reserving to my wife the use of the wheels during hier life.
I lend the use of the plantation and lott whereon I now live with all the house hold furniture, stocks, and tools of all kinds (not before bequeathed) unto my beloved wife Winifred during her natural life and after her decd. to be equally divided between my two sons Theophilus and James.
In case anything should be recovered of William Eastham and others at the General Court concerning a debt my self and Mr. Jeff paid for Stephen Jett, I give my proportion to be equally divided between the children of Stephen Jett by my daughter Elizabeth.
I do appoint my beloved sons John Read and Hankerson Read exors.
Wit:                                                            John Read
James Pendleton
Humphray Sparcks
Peter Bowmer
19 Sept. 1765. Presented in Court by John Read and Hankerson Read exors. Proved by the oaths of James Pendleton, Humphry Sparks and Peter Bowmer.
Children of John Read Sr. and Winifred Favior were:
1.     John Read Jr. – born 1734
2.     Winifred Read – born 1736
3.     Elizabeth Read – born 1737
4.     Theophilus Read – born 1738
5.     Captain Hankerson Read – born 1739
6.     Ann Read – born 1741
7.     Mary Read – born 1742, died 1802
8.    James Read – born 1744

The entry above indicates that John Read purchased land from Isaac Norman in the country before it was known as Culpeper County, when the territory was part of Spotsylvania County [see earlier entry from 1730].
Another entry shows John Read and sons John Read Jr. and Theophilus Read leasing land for tobacco in Culpeper County in November 1751.
Pages 375-77. 22 Nov. 1751. John Shakleford, planter, of Culpeper County, to John Read, planter, of same. Lease of 150 acres, part of a tract whereon Shakleford now lives…north side of south branch of the Little Fork … on a path side … on Indian Run … up the river …
For lives of John Read, John Read junr. and Theophilus Read. If either of the lives should cease before 1820 the survivors shall have power to enter another life during the term.
Annual rent, 530 pounds of tobacco on 15 December.
If John Read or tenant work thereon more than four tithables besides himself, to pay for every tithable beside the four and himself 100 pounds of tobacco additional rent.
John Shakleford
John Read
Wit: John Wetherall, Harbin Moore, Tho: Houison.
22 Nov. 1751. Acknowledged by John Shakleford and John Read.
John Read Sr. purchased 500 acres in St. Mark’s Parish, Culpeper County, Virginia from James Pendleton and his wife Elizabeth on 20 November 1755. According to the deed, the land was located
On the North Little Fork being part of 3000 acres purchased of John Willis Shakelford and Henry Hufman…on the So. side of Willis’s Run being a corner of Huffman’s land purchased of Pendleton … in or near Willis’s line… corner of Willis’s alias James Pendleton’s line… head of Dowdie’s Hog Branch … near a fork of the branch… on Indian Run … to the mouth of Willis’s Run …
James Pendleton
Elizabeth Pendleton
20 Nov. 1755. Acknowledged by the parties. Elizabeth was first privily examined.
On the land acquired from Pendleton, John Read built the home that stayed in family possession for over 217 years. The property was located northwest of Jeffersonton, Virginia in Culpeper County (near the border with Rappahannock County).

Update - 24 February 2012
After I posted this, I found the tree for a descendant of the Reads on Ancestry.com. The Read house still stands (located on Prosit Lane, off Highway 229/Rixeyville Road, just south of Jeffersonton, Virginia). Apparently there is a small cemetery on the grounds as well. I will definitely be checking this out on my next trip to Culpeper.