More testimony in the Riggs case

I am continuing to make my way through the 107-page case file from the Tennessee State Library and Archives for State of Tennessee v Pleasant Riggs. Yesterday I covered the testimony of my 3rd-great-grandfather, Joseph Jones. The testimony of witness Columbus Biddle provides more context into the dispute that led to the killing of Captain John A. Thornhill. Biddle stated that there were two factions in the regiment, one led by Thornhill and one led by Colonel Parsons. He said "the feeling was very bitter between the two parties. I do not know which side Riggs was on. Captain Bell was on the Parsons side. Riggs was a private soldier in Captain Bell's company."

Sarah Jane Thornhill Ryan, sister of Richard Thornhill, and Margaret Emily Thornhill Bowers, sister of Captain John Thornhill, were present at the home with the company led by Captain Bell arrived. They both provided testimony that the company called John out of the house and shot him as he ran. 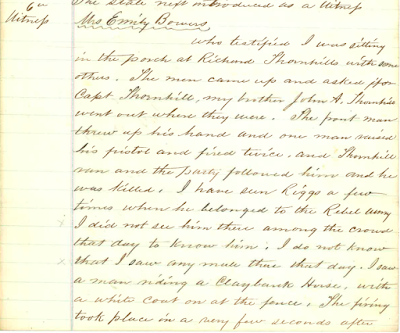 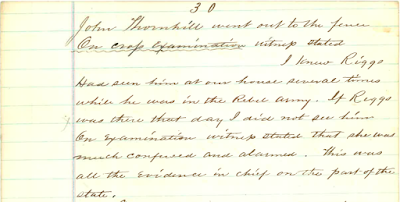 The rest of the case file shows the charge to the jury in Grainger County and the costs provided to the court and witnesses.
Posted by Patrick Jones at 8:23 AM