Friday Photo - Dino on the Promenade

I haven't been back to Los Angeles since January. I've been feeling the pull of the West Coast with LA meetings coming up, so today's Friday Photo is in honor of Santa Monica.
Posted by Patrick Jones at 7:38 PM No comments:

Results from the National Archives

A week ago I emailed the National Archives in Kansas City to request a copy of my great-grandmother Manuela Portillo Campuzano's Alien Case file. The copies arrived in today's mail. Upon reading the file, it appears that Manuela never became a U.S. citizen. She was a permanent resident alien, and she retained her Mexican citizenship throughout her life.

Although I already had a few pictures of Manuela from her wedding photo (see my post on the Campuzano's in the 1940 US Census) and her "conversation" photo with my Granny, seeing her alien registration photo, finger print and handwriting was different.

The Alien Registration Act of 1940 (also known as the Smith Act) became law on 29 June 1940. Manuela originally registered under the act on 25 October 1940. Her 1940 form notes clearly that she had not applied for citizenship in the US.

Manuela submitted an AR-3 form on 18 July 1945, upon returning from a June visit to Mexico when she crossed back into the US at Nogales, Arizona.

She supplied an address report card on 5 January 1951 (signed Manuela Portillo de Campuzano), stating that she was a national of Mexico. This card also confirmed her birth date as 31 May 1905.

Manuela filed an application for a new alien registration receipt card on 4 September 1952. This form AR-16 confirmed her parents names as Manuel Portillo and Teresa Diaz Portillo, and her city of birth as Hermosillo, Sonora, Mexico. Her first arrival in the US was on 28 November 1922 (see my post Manuela's Arrival). Under the remarks box, the officer in charge noted that she was "applying for I-151". This is a replacement Green Card.

Manuela's replacement I-151 was issued on 18 September 1952. I'm still struck by that stamp at the bottom of the form. My Granny, and her siblings, were all born in the US, so by birth they were US citizens, even though her parents were permanent resident aliens and appear to have retained Mexican citizenship.

In light of the immigration debates of today, this fact hits me, that even when my Mom was young, her grandmother was not a citizen. It is great to see that at least Manuela had permanent legal status.

I haven't yet found an alien registration file for my great-grandfather, Plutarco Campuzano. It is possible he did not become a citizen either.

I am once again thankful for the Internet, and for the publication of indexes to this information. A week ago I did not have this information, and today I'm holding a copy of my great-grandmother's picture and her replacement green card form.
Posted by Patrick Jones at 10:40 PM No comments:

Happy birthday weekend to our little guy, who's not so little now.

On travel to meetings, I tend to keep an eye open for street art & graffiti. The photos below were from last week's meetings in Geneva.

Alien Case Files at the National Archives in Kansas City

Last week Ancestry published the index to Alien Case Files at the National Archives in Kansas City. This is an exciting development for me, as I was able to quickly find my great-grandmother Manuela Portillo Campuzano in the index. What is the index? Well, if you had an ancestor who was an alien in the US in or after 1940, you will want to see what is in the A-File.

What is in the A-File?

According to the description on Ancestry, contents vary but the database has the index to files for immigrants born prior to 1909, created between 1944-2003. The files can contain:
The Alien Registration Act of 1940 required aliens 14 or older living in the US to register and be fingerprinted. The Immigration and Naturalization Service created the AR-2 form for registering aliens beginning in August 1940.

On Monday evening I sent a request to the appropriate email address for NARA Kansas City to request a copy of Manuela's A-File. Today I received a response from a helpful archivist at the Archives who had the file. I was able to make a payment for the copies over the phone, and she's sending the file in the mail. There are six pages in the file including a photograph.

I am hoping the file has information on Manuela's father, Manuel Portillo. His side of the tree is a brick wall for the moment. I'll post an update after I receive the file.
Posted by Patrick Jones at 2:22 PM No comments:

Last week I attended meetings in Geneva, Switzerland. At the Palais des Nations, across from the United Nations Office in Geneva is a large wooden chair with three legs. I later learned this is called Broken Chair, and symbolizes opposition to land mines and cluster bombs. The chair is nearly 40 feet tall. A simple but powerful monument.
This was taken last Tuesday, 14 May 2013.
Posted by Patrick Jones at 11:01 AM No comments:

Thanks to some genealogical kindness from the Barren County, Kentucky list on Ancestry, I now have a transcription for the obituary of my 2nd-great-grandfather Charlie Read:

After a long and painful illness of bone tuberculosis, Mr. Charley Read died last Wednesday night, at the age of forty years. He had been in the butcher business here all his life and was regarded as an honorable and safe business man, and was highly valued as a citizen. He leaves his wife and ten children, Messrs. Alvin, Lawrence, Stanley, Herbert, Carl and Misses Maymie, Ruth, Lillian and Pearl Read, all living with their mother. His father, Mr. Dudley Read, was a butcher here for more than half a century and died only a few months ago. The mother, Mrs. Dudley Read, died only recently. One brother, Mr. A. S. Read, died a month or so ago. Three brothers survive, all prominent citizens of town. They are Messrs. B. B., Eugene and Enoch Read. Mr. Read was a member of the Presbyterian church. Funeral services were conducted by Rev. A. S. Ewald, after which the remains were interred beside those of his brother, on the A. S. Read homestead at Dugantown.
Posted by Patrick Jones at 8:37 PM No comments:

There are still many potential connections who have no family tree connected to their results. Perhaps as more people become aware of the possibility to more easily identify common ancestors, they may connect their trees to the DNA results.

It has been cool to find the connections have been on both sides of my tree. We have the additional information from my Mom's results and that helps quite a bit too. One connection appears to have a link somewhere in the tree from my Granny's Hermosillo, Sonora line, which is a part of the tree where I have a brick wall with my 2nd-great-grandfather Manuel Portillo. More research is needed, but the DNA results are beginning to pay off by identifying others searching for the same families.
Posted by Patrick Jones at 10:24 PM No comments:

A postcard between cousins

The postcard below was sent in March 1909 by eleven-year old Edna Pearl Allman, to her cousin Dewey Runyan (daughter of Dora Jane Allman Runyan) in Vermilion County, Illinois. Edna was the niece of my 2nd-great-grandmother. 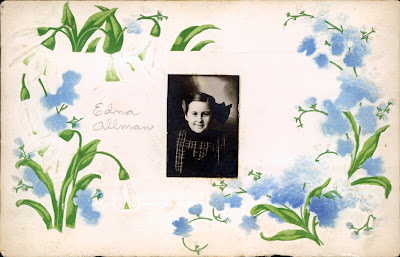 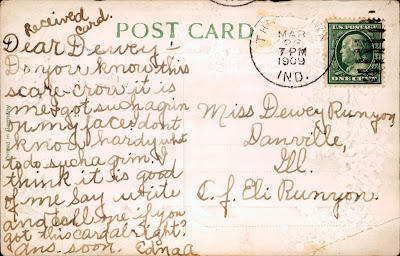 Edna appears to have been a lively, fun kid. It is sad knowing that her time was cut short.

She fell ill to tuberculosis and died at the age of 15 on 30 July 1913. Her story made the Indianapolis Star in the 1 August 1913 issue (found this evening on Newspapers.com). 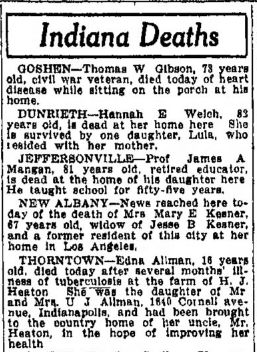 There are a few more photos in the Allman set. This is probably the most touching find in the package of photos and postcards. In 1913, the Heaton farm of her grandparents was located in Sugar Creek Township in Boone County. Agnes Allman Oyler, my great-grandmother Alma and her siblings, likely visited and would have experienced the pain of her loss. Alma and Edna were close in age (Alma was born four months before Edna in November 1897).

I post this as a memorial for Edna Pearl Allman, who died too soon, almost 100 years ago.
Posted by Patrick Jones at 10:05 PM 3 comments:

I'm continuing with the set of Ura James Allman, wife Emma Heaton Allman, and children Edna and Roy Allman. Below is an undated photo of the family, in Thorntown, Boone County, Indiana. 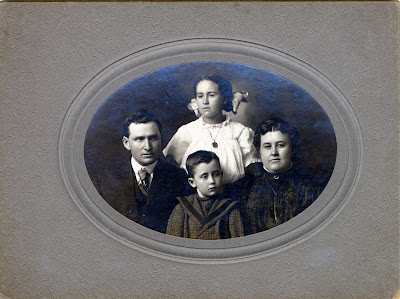 A picture of Edna as a toddler is below, followed by a photo of Roy.

Posted by Patrick Jones at 8:32 PM No comments:

This photo shows Edna Pearl Allman and Roy Davis Allman, the children of Ura James Allman and Emma Heaton Allman. There are more photos in the Allman set of Edna and Roy. I'll have more on Edna's story in future posts. 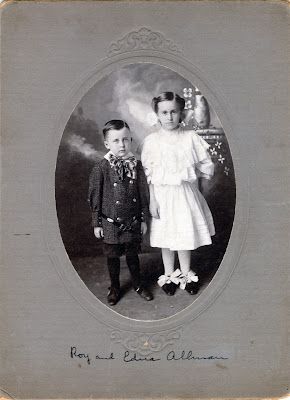 Posted by Patrick Jones at 9:06 PM No comments: