The photo below shows Alice Davis Allman with daughter Maude Allman, wife and daughter of Ephraim Allman. Ephraim was a younger brother of my 3rd-great-grandfather, William Allman. 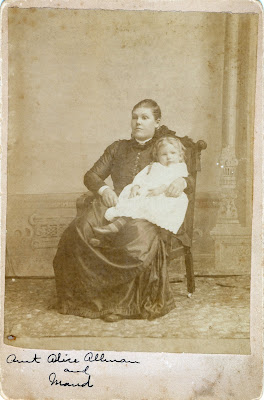 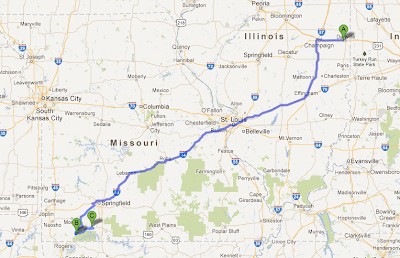 Ephraim Allman
Ephraim was born on 18 March 1848 in Carroll County, Ohio. This information comes from the Barnes and Flint research provided to the First Families of Ohio (see my post from 6 November 2012). He appears in the 1860 US Census in Wood County, Ohio, with his father James Allman, James' second wife Sarah, his brother Robert and step-brothers Rinaldo and Willie.

Ephraim married Alice Davis on 24 December 1870 in Barry County, Missouri. Ephraim died in 1901 and is buried in Rocky Comfort, Missouri.

I really have not done much research on Ephraim or Alice Davis Allman. It does look like Maude Allman married a Monroe Davidson and appears in the 1930 US Census. Perhaps some of her descendants may be interested in the photo here.

This is part of the collection I received from Robert in Illinois, he found this, with the other photos, in papers that had been saved by his father.
Posted by Patrick Jones at 6:00 AM